Annual Statement of the National Chairman, Mr Fred T Phaswana, to the National Council of the South African Institute of International Affairs.

Twenty years after the end of the Cold War and the triumph of the Western liberal international order of democracy and market economies, the world is facing, in 2009, the biggest financial and economic crisis in 80 years. This is challenging the very premise upon which the Western world has built its prosperity and from which the post-Cold War order emerged. The magnitude of the economic turmoil is yet to be fully determined but its fall-out has already led to a reappraisal of many of the core principles and assumptions on which the current world order was erected.

While it is perhaps premature at this early stage to determine the full implications, one lesson is clear: Sustainable development and prosperity are not possible where greed is the overriding principle and where accountability and transparency are ignored. In the last year, the West and its global system have been tested by the successful Russian invasion of Georgia, a US ally, in August; the cancellation of the China-Europe summit scheduled for December, following prescriptive noises from Europe about human rights in Tibet; and the unprecedented collapse of Western wealth and potentially influence and power, which reached a crescendo in the last quarter of the year. Nevertheless, we are reminded as never before of how interconnected the world has become. Few would have imagined that a sub-prime crisis in the US would lead to the collapse of Wall Street, the public bail-out of some of the most prominent bastions of finance in the world, the collapse of exports in China, Europe and Latin America and the end of the commodity-boom in Africa.

Times of great change carry inherent instability, but also opportunity. Recognising and grasping the opportunities prepares countries to perform better in a new era. This is the time we face today in Africa, and we have to draw the correct deductions from it, both on the continent as a whole and in South Africa more specifically.

Good leadership is an imperative in times of political or economic crisis. Some leaders rise to the challenge. Others are overwhelmed and retreat behind the barricades or deliberately opt for demagoguery to obfuscate and bluster. Where does Africa stand?

There is much that African nations can do in this time to support trade in, and with, the continent rather than opting for a protectionist stance that proved so fatal in the 1930s. In a recent speech in Tanzania, the president of the Africa Progress Panel, Kofi Annan, enjoined Africa to be part of the solution – of a ‘global stimulus plan’. This would entail ‘a continent-wide pipeline of ready projects, focusing on clean energy, roads, rail and port facilities that would create jobs, stimulate economic activity, both in Africa and globally,’ and would position Africa to be far better able to pursue economic development and prosperity for its entire people in the long term.

This is the way in which we need to approach the economic meltdown. How do we become better masters of our fate? How do we better champion our case in international fora? How do we prepare to position ourselves or the next upturn?

What African leaders should regard as a non-negotiable is relinquishing the strides many of their economies have made over the last decade in reducing their debt and creating more business-friendly investment climates, the basis upon which societies can build domestic productive capacity.

Political scientists will tell you that there is no direct link between democracy and development. However, what is not in dispute is that accountability to one’s citizens is essential for a country to embark on a sustainable growth path. Last year SAIIA’s National Council expressed alarm at the continuing undermining of democratic processes in Zimbabwe and Kenya. Today, both countries have governments of national unity, but the extent to which they are governing in a way that reflects accountability to their citizens is still in dispute.

What can we learn from other regions and countries? The election of Barack Obama as president of the US in November 2008, on a ticket of hope and promise of renewal reaffirms the importance of political leadership in inspiring citizens and revitalising a society. It also highlighted the enduring ability of an open society such as the US to reinvent itself, even after the darkest night, through the values that it embodies.

Compared to the US, South Africa has had a short history as a constitutional state. We are facing enormous challenges as a society and we should hold our leaders to the highest principles and founding values of our constitution. Our policies should protect the poor and the weak; give hope and inspiration to our future generations; and build on the legacy of our founding fathers. Our institutions are still young. Respect for the values in our constitution has still to be tested. These two pillars must guide us even more as a new administration moves into the Union Buildings later this year.

These should also underpin our external engagement. Active foreign relations have been a prominent characteristic of South Africa’s return to the world. They have also been the source of much debate. What should a new administration prioritise in its foreign policy in these trying times?

First, the South African government requires a frank assessment of where we have succeeded, where we have failed and why. This should form the basis of a new white paper on a post-transformation foreign policy that considers how best South Africa’s national interests and priorities can be advanced in the radically different global environment of the 21st century.

Second, at a time of rising socio-economic hardship internally, there should be a clear articulation to the population of the link between the country’s domestic concerns and constraints, and how its foreign engagements help to address these.

Third, priorities, linked to what is realistically achievable, must be determined, and adequate resources – both human and financial – allocated. The difficult global environment makes the adoption of a tightly focused agenda an imperative.

The world is more interconnected and complex now than 75 years ago, when a group of individuals decided to establish an institute of international affairs in South Africa. At the time, a leading article in the Cape Argus, noted that if the proposed Institute could bring ‘foreign affairs within the reach of all who are today curious about them, as well as to provide the advanced student with his [sic] necessary raw material […] then it can confer an invaluable benefit upon [South Africa], whose stake in world affairs grows greater with every decade’. A few years later in an address to the Cape Town branch of SAIIA in 1948, Whitney H. Shepardson, a US delegate to the Versailles Peace Conference, noted that ‘[South Africa] occupied a place of great strategic importance in the African Continent, yet nowhere in the world was Africa, south of the Sahara, from a political point of view, being studied as a whole. If the SA Institute could lay stress on this it would confer an enormous benefit on people in many countries where these things were not being studied.’1

These words are as relevant today as they were then. Africa should not only be a consumer of knowledge, but also a generator of knowledge. It should be not only a recipient of decisions, but a shaper of decisions. And the continent’s citizens should be both informed and active stakeholders in these processes.

These imperatives inform the mission of the South African Institute of International Affairs. In the first decade of the 21st century, SAIIA is one of the premier think tanks on Africa, and on global matters as they affect Africa. It has name recognition not only in the UK, continental Europe and the US, but increasingly in emerging economies and other African states.

SAIIA’s role has grown. As an African policy think tank we have a particular responsibility to undertake research that is relevant to the questions policymakers seek answers to, and constructive in its policy analysis and recommendations. We must also contribute to the creation of a climate of informed policy debate in South Africa and beyond. And we have a duty to help build research leadership and excellence among the next generation of African policymakers.

We believe that we are at an important crossroads in Africa and South Africa, where the gains of the last decade will be tested. The tests will also come from the new threats to ‘global public goods’, especially climate change. Africans can and should play an active part in the global search for a sustainable development path for humanity. This is a theme that touches the life of the banker in New York, the farmer in India, the worker in China and the trader in Lagos.

SAIIA will continue to build African knowledge, analysis and insight on these matters that are so crucial to South Africa and Africa’s prosperity. 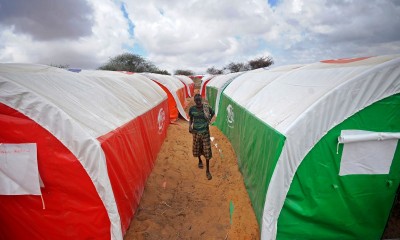 Volume 27.4 of our journal is now online