Ahead of COP 17: Focus on the Forests

2011 is the United Nations Year of the Forest.

It is also the year in which South Africa plays host to the17th Conference of the Parties (COP17). Forestry has come to occupy a central place at international climate negotiations. Both of these events justify a closer look at this important yet threatened natural resource – one of those studied by SAIIA’s Governance of Africa’s Resources Programme.

Think of forest products, the first thing that comes to mind is timber – a versatile and potentially renewable natural resource long used not only in the construction and furniture industries, but also in the manufacture of paper, packaging and even baby nappies.

Forests are also an important source of energy. Whereas for some, the words ‘wood’ and ‘charcoal’ conjure up images of leisurely barbeques in summer and cozy fireplaces in winter, for many in the developing world, biomass plays a much more central role. In the absence of alternative sources of energy, many developing countries traditionally regarded as ones with ‘high forest cover’ still depend on wood and charcoal for well over 80% of their energy needs.

In tropical areas, natural forests face competition for land from crops like palm oil (used widely in food and cosmetics), sugarcane (used as a food crop and for bio-fuel) and from cattle ranches (to satisfy the world’s appetite for meat). These are not forest products, but rather products from forest-land.

Forests and forest-land provide not only products, but also services. Topping the list of ecosystem services provided by forests are those related to hydrology (water), biodiversity, carbon sequestration, religious significance and scenic beauty. Forests play an important role in river basin management by regulating water flows, protecting water quality, reducing sedimentation and preventing floods, desertification and landslides. The value of forest biodiversity is reflected in the fact that rainforest plants are responsible for as much as 25% of the drugs used in Western medicine.

Tropical rainforests play an essential role in regulating global weather patterns. They store carbon and slow climate change. Yet forests can serve as either carbon sinks or carbon sources. So it has been estimated that emissions from deforestation rival that of the global transport sector. It is for these reasons that reducing deforestation and degradation (REDD+) in developing countries is seen as a priority for climate change mitigation. Like other payment for ecosystem services (PES) initiative, REDD+ aims to attach a value to the ecosystem services provided by forests. It is one of few areas in climate change negotiations on which the developed and developing world agree. Yet implementing a complicated scheme like REDD+ in environments as complex as the DRC leads to challenges as least as large as the opportunities. 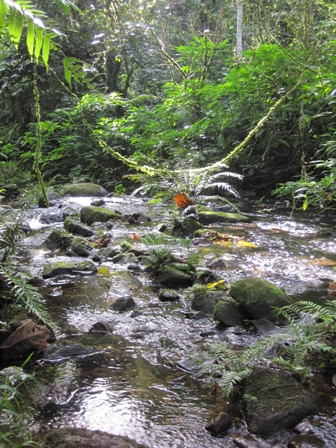 Forests are central to the world. They’re also central to Africa. At the heart of the continent lies the Congo Basin Forests – a block of tropical rainforest second in size only to the Amazon. More than half of this forest is found in the Democratic Republic of the Congo. The significance of tropical rainforests has seen much international attention focused on these forests, and justifiably so. However, these are not the only important forests. Beyond the tropics, two African mountain ranges make it onto an International Union for Conservation of Nature (IUCN) list of the ten most threatened forests in the world.

The coastal forests of Eastern Africa – stretching from Mozambique in the south to Somalia in the north – comes in at 8th position and the Eastern Afromontane forests – spread out around the African Great Lakes and northwards through Ethiopia and up into Saudi Arabia – are in the 10th position.

The focus on tropical and high-risk forests threatens to obscure the important role played by Africa’s dry forests, which cover more than 40% of the continent’s land surface and contribute significantly to the household income of the 235 million people who live in these rural areas.

Finally, timber and other forest products are highly traded goods, both regionally and internationally. A country like Uganda imports timber from South Africa’s plantations and from the neighbouring DRC’s natural forests. The vast majority of Mozambique’s wood is exported to China – ‘the wood workshop of the world’ – and from there might end up on the shelves of big box retailers like IKEA and Wallmart.

The importance of governance for forests can best be explained by the fact that, even though forests are part of nature, it is people who make decisions about how to use them. The role of people as custodians of nature is reflected in the names of certification schemes like the Forest (or Marine) Stewardship Council.

Despite many years of negotiations, the people of the world have not yet agreed on the best way in which to govern the forests of the world. In the absence of a global agreement on forestry, there is a plethora of initiatives, including REDD+ and FSC certification mentioned above. In the field of trade, the European Union is working towards Voluntary Partnership Agreements (VPAs) with a couple of African states in the context of a bigger initiative entitled Forest Law Enforcement, Governance and Trade (FLEGT). Worldwide trends toward multi-stakeholder forest governance can also be seen from the local level to the regional and the global. One example of such multi-stakeholder governance was IUCN’s Strengthening Voices for Better Choices (SVBC) pilots. For a case study of SVBC in the DRC, download “Seeing the Wood for the Trees: Forestry Governance in the DRC”. An example of multi-stakeholder governance at the regional and global level is the Congo Basin Forest Partnership (CBFP).

Also keep on the lookout for a forthcoming publication on the timber trade in the Great Lakes. SAIIA researchers Romy Chevallier and Mari-Lise du Preez recently returned from field research in Uganda and the DRC and are in the process of writing up their findings. The pictures that you see here are from this trip.