The dispute began in 2008, when the Amadiba community contested the government's decision to award mineral rights in the area.

It is now more than a month after the date committed to and there is still no word from the minister or her department on the issue. Of even greater concern is that calls by a departmental team for further consultation appear to have gone unheeded.

This is the second 30-day extension the minister has asked for. The repeated delays have raised the suspicions of some members of the Amadiba Crisis Committee, a community organisation that believes Shabangu might be trying to find a legal basis for not revoking the mining permit.

In September 2008, the committee challenged the legality of the awarding of mining rights to the Australian company Mineral Resource Commodities through its South African subsidiary, Transworld Energy and Mineral Resources. The challenge was based on the concern that the mining development would result in environmental degradation in the Pondoland Marine Protected Area.

The Amadiba committee also raised concerns about “fatally flawed” community consultation and the absence of a community resolution supporting the mine. A month later, former minerals and energy minister Buyelwa Sonjica put the mining rights on hold pending further consultation. Almost three years later, the spokesman for the Amadiba says that no such consultation has taken place.

Despite this lack of communication with the community, the minister is expected to make a decision soon. That an announcement is imminent raises important questions. First, on what basis will she come to a decision, given that the community has not been consulted since the suspension of the mining rights? Second, the team appointed by the department produced the Holomisa report, dated March 2010, which concluded, among other things, that:

The report recommended that, before a decision was taken on mining rights, an interdepartmental committee be set up as a channel through which these issues could be addressed. Third, will tensions in the community be reignited if the minister decides to allow Transworld Energy and Mineral Resources to exercise the mining rights?

It is clear that the community sees two very different, perhaps divergent, development paths. From its perspective, the government favours a top-down, “imposed” growth strategy that will benefit only a few. By contrast, many in the community prefer the continuation of a local ecotourism project that is seen as people-centred, bottom-up and broadly based in the distribution of economic benefits.

A further concern is that adequate consultation of intended beneficiaries should not be supplanted by anything. The community should be able to decide on its own development. This case also illustrates that development projects, particularly when they are perceived by a community as imposed by the government or big business, are likely to cause conflict. 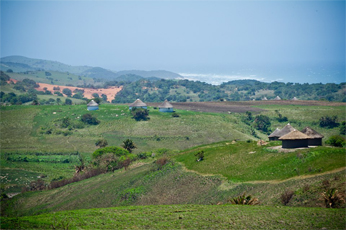 A village that will have to be relocated should the mining rights be granted.

Finally, a company called XolCo has been formed for the sole purpose of acting as the black economic empowerment partner of Transworld Energy and Mineral Resources. The Amadiba Crisis Committee says XolCo is not representative of the community, despite its claims to that effect.

This raises the concern that BEE legislation, directed at economic redress, is being perverted at the community level. While the department deliberates on the decision, the future of the Amadiba community hangs in the balance. Development is currently at a standstill. Regardless of the minister’s decision, this case has proved beyond doubt that people have the capacity to challenge imposed decisions that have the potential to threaten their wellbeing.

Let this be a lesson in future.

Creating ‘triple win’ solutions for nature, communities and the economy

The Climate–Conflict Nexus in Africa: A Conflict-Sensitive Approach