Political upheaval in the Nile Basin

During March and April this year I spent a significant amount of time traversing the complex network of gravel roads that run from Hoima to the shores of Lake Albert in western Uganda.

This Lake has become the epicentre of Uganda’s oil sector with nearly 2 billion barrels of proven reserves. Tullow oil that has been leading the exploration campaign recently signed a deal with Total and CNOOC to begin production this year or by the latest in 2012. Lake Albert lies in the Albertine Graben, and oil experts speculate that the graben may yet yield up to 6 billion barrels of oil. The border between Uganda and the DRC also runs through this lake. On most days the mountains of the Congo on the opposite shore are shrouded in a cloak of hazy mystery.

On one particularly hot and sundrenched afternoon on the shore of the lake, which is also known by its Bunyoro name, Lake Mwitanzige, it suddenly struck me just how important this lake is as a cog in the water machinery that feeds the mighty river Nile on its more than 6600km (the Nile’s first tributaries are located in the highlands of Burundi) march to the Mediterranean. The research on the impact oil exploration, and soon production, is set to have on the societal nexus of Western Uganda I was conducting thus prompted the realisation that in addition to Uganda’s oil, other major social and political waves of change have been washing through the Nile Basin since January of this year.

Two distinct processes of change can be observed in the Nile basin (which measures 3.1 million square kilometres). The first is happening at a societal level, and the best example thereof is the Egyptian revolution that swept Hosni Mubarak from his pyramid of power. The second process of change pertains to the repercussions of processes of political change happening at the national and regional level. The emergence of the Republic Southern Sudan as Africa’s 54th independent state is an example of the latter process. There are, of course, several permutations of these processes of change. In northern Sudan, it would for example be important to study the political consequences that may result from the economic shock the northern economy is set to suffer as a result of southern independence. In the case of Sudan alone, processes of macro-political change thus impact directly on the attendant societies. These social impacts could in turn unleash new political dynamics in the polities. It is in the complex interplay between social and political forces that the upheavals in the Nile basin can be seen most clearly.

In Egypt the military council is purging the police of elements linked to the old regime, which in itself raises questions about the long term animosities it may create in an uncertain political environment. Recent bomb attacks on gas pipelines in Egypt that feed Israel’s energy needs could be a worrying signal of emerging conflict dynamics. Current and future rulers of Egypt will therefore have to manage the systematic dismantling of an oppressive regime, purge institutions of the old systems’ thugs, and manage the frustrations of a citizenry that clearly showed they are willing to die for freedom on the Tahrir Square. Yet, a few months down the line, the revolution and Egyptian society is entering a zone of uncertainty with a military council in power. Questions are being asked about how long they will remain, and when elections will be held to edge closer to the goal of creating a democratic Egypt. What thus emerges is a complex set of revolutionary/opposition forces tangentially comfortable with military rulers, for now. Unanswered questions on Egypt’s horizon pertains to the influence of, and evolving relationship between the military and the Muslim Brotherhood which is by far Egypt’s oldest and best developed socio-political force.

On that hot and sticky afternoon on the shore of Lake Mwitanzige it dawned on me that the one thing that is as clear as daylight, is that several inchoate flows or, incoherent and largely unpredictable political dynamics have been unleashed in the Nile basin since the beginning of this year. Regardless of what government is to come in Egypt, control over the Nile will remain a crucial strategic imperative with 85% of the country’s water flowing in from the south.

Back in Sudan, Ethiopia started deploying its contingent of peacekeepers to start the process of demilitarising the Abyei border and to form a bulwark against more violent clashes between the Sudan Armed Forces and the Sudan Peole’s Liberation Army. It is estimated that by year end, nearly 400, 000 southerners would have returned to the south. The region is no stranger to mass migrations and, on occasion, the involuntary movement of people due to conflict. But, the implication of this mass southerly migration is that at a social level, the split between the two Sudan’s is not only re-writing history, but also unleashing the genie of socio-economic uncertainty in southern Sudan which is well endowed with oil, but has the dubious honour of harbouring the poorest people on the planet.

After taking the oath as first president of the Republic of Southern Sudan on 9 July, Salva Kiir Mayardit declared a public amnesty to all the forces that have taken up arms against the SPLM in recent years. Armed militias and groups that have splintered off the SPLA is therefore an unsettling presence in Southern Sudan. If, as argued above, the political upheavals in the Nile basin can best be observed in the complex interplay between social and political forces, it is also important to study the multilateral mechanisms that have been deployed to keep the parties in Sudan talking through a very emotional, highly flammable, and historically significant transformation. The African Union High Level Implementation Panel (AUHIP) intervention, chaired by Thabo Mbeki, has thus far managed to take the South African example of negotiated change to the coalface of change in the Sudan. Thus far it has been bearing fruits, and much work and analysis remains to be done to understand why it has succeeded thus far, and to ask how the model of negotiated change can be adapted to other conflicts and processes of internal political change taking place on the continent.

However, the story of political upheaval in the Nile basin does not begin and end in southern Sudan. As mentioned earlier, Southern Sudan’s ‘new’ northern neighbour stands to feel the short, medium and long-term economic consequences of relinquishing control over nearly a third of its territory. Conservative estimates state that the north will lose about 35% of its income, while a new deal regarding the export of southern oil through northern pipeline infrastructures is yet to be struck. 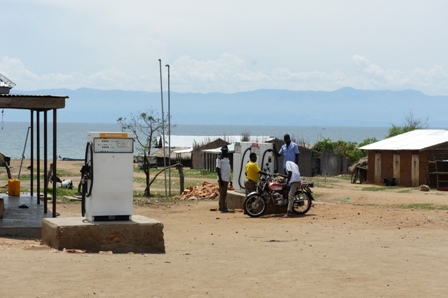 A village on the banks of Lake Albert. Image: Petrus de Kock

The interplay between political change, the social response thereto, and the severe economic shock northern Sudan is to suffer due to southern independence may yet unleash several inchoate political flows in northern Sudan. Internal divisions in the National Congress Party (NCP) that stem from divergent points of view on southern independence, and uncertainty about the political fall-out it may yet generate, will surely lead to calls for change in the northern political landscape. Interestingly enough, earlier this year Egypt’s Muslim Brotherhood offered to act as intermediary between the NCP (in particular president Bashir) and Hassan al Turabi (who has called for Egypt-style protests against the NCP and who is accused by the government of links to the Justice and Equality Movement in Darfur) in order to smooth over some of the deep rifts that mark north Sudanese politics.

At a social level it can be observed that in as much as the formal political process of establishing a new independent state in the south has run its logical course, the societal challenge the governments of the north and south have to confront immediately relates to the politics of identity. Rebellions against the SPLM in the south, the ongoing Darfur conflict in the north, and the radical redefinition of borders will have to be matched by efforts to (re)construct the foundations of common identity in the two new states. Underlying nearly forty years of civil war in Sudan’s post-independence history are factors of identity politics, which means that the political survival of current governments and the viability (or survivability) of state institutions, will be linked to leaders’ ability to forge new social contracts and inclusive national identities.

The Nile basin, of course, also includes Ethiopia. The Blue Nile’s origin lies in the highlands of Ethiopia from where it runs through Sudan to converge with the White Nile at Khartoum. The earthquake of Southern independence has impacted on the thinking of the Ogaden National Liberation Front (ONLF) that has been fighting the Ethiopian government since the 1980s. The ONLF dispatched a heartfelt message of support to the SPLM upon achieving the establishment of an independent state after decades of struggle.

The Ogadan, a region in Eastern Ethiopia, is seen as originally part of Somalia by the ONLF because the British government incorporated it into Ethiopia in the 1950’s. The ONLF struggle for a semi-autonomous region or independence from Ethiopia, has therefore been given some psychological impetus by the idea of the SPLM/A managing to wrestle for, and succeed in chopping the Sudan up to create a new independent republic.

Political upheaval in the Nile Basin is therefore a harsh reality that stands to redefine all levels of human social and economic activity in the region as well. It is, however, not only negative. Political change in Egypt may be caught in a period of uncertainty as the transition unfolds, but, with constructive engagement and a willingness to evolve the political system towards greater openness and freedom, the African continent can stand to gain on the frontlines of the search for accountability and improved governance. Like all political battles it will take time and perseverance to weather the storms of transition politics.

The only conclusion to be drawn from this is that divergent levels of socio-political uncertainty can be found all along the Nile basin from the shores of Lake Mwitanzige where lives are being changed due to the rapid development of Uganda’s oil sector, through the Sudan’s, up to Egypt’s Mediterranean shoreline. As a South African one might ask, how will our foreign policy adapt to these changing circumstances, and how can the model of negotiated change be communicated to actors in the Nile Basin to avert armed conflict and thus to find new common political and social grounds on which to build new nations and democratic African states?