Why SA must fight against war in Syria

Like Libya last year, the rapidly deteriorating situation in Syria is forcing tough foreign policy choices the world over.

In Ankara, the Turkish government has made its opposition to the Bashar al-Assad government crystal clear. The country’s border with Syria is nowadays a porous line across which refugees flee to get away from a country going up in flames. Dissidents and elements of the loosely defined Free Syrian Army also use this border as a space to run logistics. Factions that support either the Assad government or opposition forces in Syria clashed in Lebanon during recent weeks.

This means the battle for control of Damascus has already spread its seeds of conflict in the regional theatre. I call it the battle for Damascus because Syria’s opposition movement is clearly willing to shed blood in its battle for political change at the centre. In Tehran, the religious and political establishments are viewing Syria with a great deal of concern. This is partly due to a long and fruitful regional partnership between the two neighbours.

In Riyadh and other capitals of the six Gulf Co-operation Council (GCC) member states, discussions on Syria run parallel to those about reform of this regional organisation. Some GCC leaders are calling for the organisation to move towards greater political, or at least a form of confederal, union in the midst of regional instability.

GCC states view economic weakness in post-revolutionary (Arab Spring) countries such as Tunisia, Egypt and Libya, signs of civil war in Syria, and continuing conflagrations in Yemen with grave concern. GCC leaders, including the Saudi king, see these conditions as a sign that closer political co-operation is needed to protect their interests and maintain stability. Conversations in the GCC about greater political union have much more to do with collective security and bolstering military capacity than economic and social integration.

In addition to these regional challenges, the perpetual internal strife and political weakness in Iraq, as well as tensions between GCC states and Iran across the Persian Gulf, are factors that foreign policy makers are pondering as they attempt to navigate stormy geopolitical seas. I describe this context because I believe any analysis of the prospects for Syria should ideally interrogate the unique internal and regional factors that shape political behaviour.

Analyses hinged on the interests and perspectives of Washington, Moscow, Paris or Beijing run the risk of lacking contextual understanding and a clear assessment of the risks involved in any form of international intervention in Syria. This is a point South African policy makers would do well to keep in mind as certain powers push for UN Security Council action.

Let me try to explain. The eruption of armed conflict usually signals that opposition forces have lost trust in a political system, and that they are prepared to sacrifice life and limb in the struggle for change. In the case of Syria, however, one of the key problems is that opposition forces are not clearly integrated, or even vaguely unified behind a collective goal (except getting rid of the Assad government). A vision of a new or transformed Syria has yet to emerge from global media noise on the subject.

This means there are too many “unknown unknowns”, to use a Rumsfeldism, in the Syrian environment. International military action (following Nato’s Libyan example) might therefore just unbottle the evil genie of total war, punctuated by increased terror tactics throughout the region. The risks of pursuing a Libya-style Nato-led military intervention therefore outweigh the benefits by 10 to one.

When designing or contemplating mechanisms available for intervention in conditions of armed conflict, it is necessary to understand that peace is not the complete absence of war, but is relative.

Here one can draw a lesson from Sudan’s second civil war (1983-2005). When the late Sudan People’s Liberation Movement/Army leader Dr John Garang de Mabior mobilised people to fight for change at the centre (Khartoum) and to bring about what he called the “New Sudan”, it was about power, representation, and an end to the marginalisation of his people.

The desire to affect national political economic change that sparked revolt in Sudan teaches us an important lesson about peace.

To end Sudan’s second civil war, parties started talks about talks in the 1990s. These on/off talks carried on for years while parties on the ground merrily continued bombarding each other. It should therefore be acknowledged that once a country slides over the precipice of armed struggle, there is sometimes very little the international community can do to prevent the fighting.

So at this moment the question the international community should pose to Syrians is whether they are prepared for a long day’s journey into the night of internal fragmentation, displacement, torture and massacre. 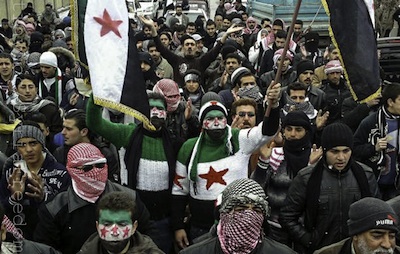 Syrians protest against Syria’s President Bashar al-Assad, in Yabroud near Damascus on 2 March 2012. Thousands of people have been killed in violence across Syria since anti-regime protests erupted in March 2011. © FreedomHouse2/Flickr/Creative Commons

This choice cannot be made by the UN, the EU, Moscow or Tehran. It is a choice only Syrians can make, and it is the duty of the international community to find new, and preferably non-militarised, means (once again taking a lesson from Libya) to protect civilians from the consequences of armed conflict.

But then, what should SA do? The answer to this is not simple. For one, SA’s principled position regarding the peaceful resolution of conflicts is, given the country’s capabilities, still the most viable avenue to take. In a world of war-mongers beset by multiple concurrent financial, climatic, social and political crises I think SA is sometimes braver than the sabre-rattlers when it reminds people of the fact that at one point in time or another, you have to face your adversaries, agree to change and work towards a better tomorrow.

We should also acknowledge that as a member of Brics, SA is confronted by a delicate balancing act between western hawks calling for military intervention and eastern doves who oppose such moves.

Some might argue that SA’s insistence on talks cannot always bear fruit.

However, as seen in the case of the two Sudans, regardless of how hard actors may want to fight one another, a deliberated and negotiated (and sometimes partial) peace is more acceptable than plunging a country or a whole region into the satanic mills of war.

The apparent lack of progress with Kofi Annan’s six-point peace plan is not necessarily his or the UN’s fault. The blame should go to both government and opposition actors in Syria due to their apparent intransigence, hawkishness and lack of willingness to compromise.

Change at the centre, reform of the political system and a need for fundamental transformation (as is taking place gradually in Egypt) is what opposition actors in Syria are calling for. In SA’s experience it takes a tremendous effort to negotiate, fight and find ways of changing a political order all at the same time (witness our history between 1990 and 1994).

If one takes a lesson from that brief but intense period of South African history, it means that the best possible outcome for Syria at this stage does not lie with a simple choice between war and peace.

Under conditions of armed and political conflict, history shows that peace can be an elusive goal achievable only at great expense and usually only at the point where adversaries are willing to compromise.

The Nato operation in Libya last year posed a tremendous challenge to SA’s decision-making in the UN Security Council.

In that case the goal of protecting civilians became something of a fiasco when certain actors took it upon themselves to arm opposition forces by way of blind weapons drops into the desert.

Libya may be rid of Muammar Gaddafi, but clashes between armed factions, an inability to chart a cohesive and collective new political path for the country, and the regional impact it has had on Mali, calls for great caution and brakes to be applied to any move in the direction of deploying Nato or other multi-national UN-sponsored forces in the skies above Damascus.

In the case of Syria, the regional and international actors with an interest in effecting some kind of change on the ground should know that whichever way the situation develops from here (talks or war) they will have to commit for the long haul. As a South African, I can say that military power may win a war, but only talks can secure long-term sustainable peace.