Waste water: a widespread threat and a missed resource

Achieving the Sustainable Development Goals (SDGs) is a global endeavour and because of this, it is often difficult to relate the SDGs to our personal lives and the actions of individuals. In this blog, we share a Youth@SAIIA voice on how the SDGs relate to her community and the issue of waste water. 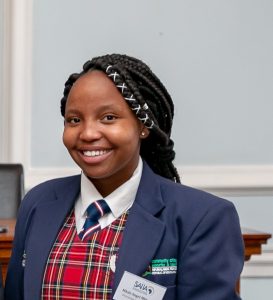 I drink a lot of coffee and when one of my cups went cold, I would just pour it down the drain. I always wondered where all the waste water went to, everything I wanted out of sight could just be flushed away. It was only after completing a research project for the SAIIA 2018 Young Researchers Symposium that I realised what an asset waste water is.

I’m a 17 year old living in eMbalenhle, a township in Mpumalanga. I have always been passionate about re-defining what ‘waste’ is. Most people don’t know that 80% of the world’s waste water is disposed of in rivers and oceans without proper purification. This is a particularly problematic issue in developing countries and sadly, eMbalenhle is no exception.

Despite a range of laws contained in the South African Constitution about environmental management, including air pollution, land use management and waste management, managing waste water is a great challenge for the Govan Mbeki Municipality.

When conducting research, with team mates from Kiriyatswane Secondary School, we found that people working at the eMbalenhle pump station were being deprived of their rights, not only to speak out against their working conditions, but to also advocate for proper water purification before it is released to the Vaal River. An anonymous municipal employee told us that if he voiced his concerns about the environmental catastrophe, he would lose his job. The Govan Mbeki Municipality does not provide suitable waste management and excludes social partners in this process, making it nearly impossible for the residents of eMbalenhle to be informed on matters affecting their health and to make changes for improvement.

The Vaal River used to carry inland water to the Atlantic Ocean. Now it carries domestic waste including pharmaceuticals, sewage, waste water, litter and other pollutants. Although eMbalenhle isn’t a coastal community, all the pollutants in the river flow into the Atlantic Ocean and this has a direct impact.

This pollution in the Vaal River has led to the spread of E.coli, leading to environmental group Save the Vaal labelling the situation as the worst crisis ever to hit the river. In the Govan Mbeki Municipality, overflowing sewers, blocked drains, faulty sewage pump stations, and the lack of proper sewer systems are the root cause of rivers flooding with sewage. Waste water has become a widespread threat and a missed resource.

The irony is that waste water is actually an asset. It can be separated to form clean drinking water, manure and sludge can be used in construction, and it can also be used as a biofuel. UCT students have even built bricks made of urine and sand to show how valuable waste can be.

But in eMbalenhle it is just flushed away, affecting water quality in rivers and ultimately polluting the oceans. A system that could not only help create job opportunities but also help address environmental concerns and the increasing demand of clean water, is not considered. Instead, this improper waste management has proliferated environmental destruction and is causing harm to the community.

We need to work together to re-define what waste is. From governments putting in place better policies on how to manage waste, to civilians being empowered to interact with the environment and actively engage in environmental governance, we need to start seeing our waste as something that has value.

Hate Crimes against Members of the LGBTQIA+ Community in South Africa

Defending our natural environment to protect us against climate change