In keeping with the tradition of encouraging healthy debate on issues of international relations, SAIIA hosted two important speakers’ meetings in Pretoria in late July and early August – with the Swedish and Italian Ambassadors respectively.

The first of the speakers’ meetings was hosted at the CSIR, where the Swedish Ambassador to South Africa, Peter Tejler spoke on the challenges for the Swedish Presidency of the European Union.

Earlier in the year SAIIA hosted the Czech Ambassador to speak about its priorities for the EU presidency and last year, the French Ambassador spoke at a similar event. Although France, the Czech Republic  and Sweden each preside over the EU for only six months they have been able to ensure a level of continuation by collaborating on an 18-month programme, so that for the most part, Sweden’s priorities do not differ substantially from those of the French and Czech presidencies.

Ambassador Tejler spoke about the six priority areas for the EU which cover climate change; dealing with the economy and increasing employment; increasing cooperation in justice and home affairs through what is called the Stockholm Programme; the strengthening of macro-regional cooperation through interventions in the Baltic Sea region; the increasing global responsibility to promote peace, stability and development of the world; as well as the adoption of the Treaty of Lisbon, which it is expected, will make the EU more democratic and efficient.

When speaking about Africa, the Ambassador said, “Sweden and [the] EU take a broad approach to development in Africa, in which security policy, aid policy and trade policy, and initiatives in areas such as climate and the environment, economic growth and free trade, social development and health are viewed, and treated, as an integrated whole.” In the question and answer session, the Ambassador re-iterated the importance of peace and security, democracy and good governance and trade and regional integration as the cornerstones for Africa’s development, saying that it was important to get these three issues right before it would be possible to address any of the other challenges Africa faces. 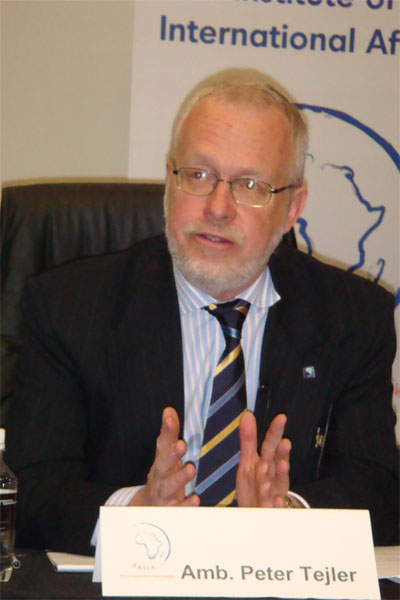 Italian Ambassador, Elio Menzione, spoke to a gathering at the Premier Hotel in Pretoria on the G8 Summit hosted by Italy in L’Aquila recently, and in particular about the various successes of this G8 meeting, as well as the likely format the forum will take in the future.

Of particular interest was the prospect, which has been discussed for some time, of incorporating the G5 (which is made up of Mexico, Brazil, India, China and South Africa) into the G8. Italy, it seems, is also keen on including Egypt, although Ambassador Menzione stressed that these decisions would have to be taken after deliberations with all the G8 ‘family’. 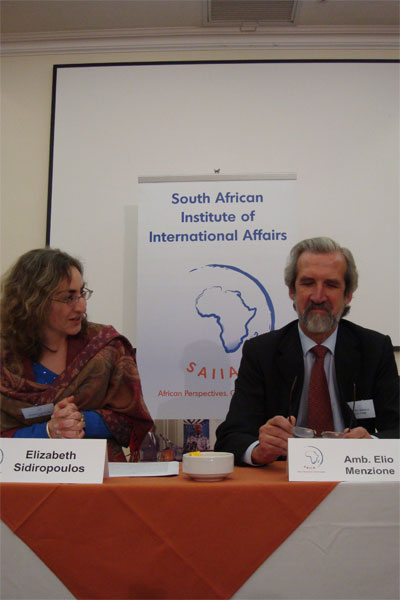 The G8’s legitimacy has come under scrutiny and its effectiveness has been questioned in recent times. Not only does the G8 represent less that 50% of the global economic output, unless its membership base increases, it will also only represent a mere 14% of the world’s population. This, coupled with the absence of an autonomous bureaucratic structure that would be empowered to implement its decisions, has led to criticisms of the G8. Many argue that the G8 should be replaced by the G20

Ambassador Menzione rejected these concerns however, saying that the G8 and the G20 were not necessarily mutually exclusive. For one thing, the G20 had proved its effectiveness in dealing with the financial crisis, but begs the question of how it will work in more ordinary times. On the other hand, the G8 had a long tradition (going back to 1974), and a high degree of flexibility in the way that each meeting is constituted. In the G8, each meeting is tailor-made to include important actors on particular issue. This enhances the efficiency of decisions taken at these meetings because discussions take place directly with the most important members on each issue.