Electing a new female head of the World Bank

Historically, he has been selected by the US president. This is unacceptable and must change. In fact, there is agreement that there should be a transparent and merit-based selection process. That the Europeans and their allies reneged on this commitment when they selected Christine Lagarde as the MD of the International Monetary Fund makes it even more important that the World Bank sets the precedent of how a transparent and merit-based selection process should work. Doing so will require the BRICS countries (Brazil, Russia, India, China, SA) and the other emerging market members of the Group of 20 to behave more responsibly than they did in the Lagarde case. What does this mean for South Africa?

Since 1994, SA has been an eloquent advocate for reforming the governance of the international financial institutions. The selection of the next World Bank president is a good opportunity to win an important victory in this campaign. Our government should work with other African states, our partners in Brics and other sympathetic World Bank member states and with allies in international civil society to ensure that there is an open and merit-based selection process. The stakes are high. This appointment is about more than just finding a World Bank leader who is a competent non-American.

It is about finding a leader with the skills, experience and commitment to make a complex institution more responsive to the evolving needs of all its stakeholders: its debtor and creditor member countries and their citizens — who are the intended beneficiaries of the bank’s operations but who can also be harmed by them. It is about finding a president who will ensure that the bank has the requisite organisational and technical capacities to work with its borrower countries to meet their most urgent challenges — finding growth strategies that reduce poverty, inequality and unemployment within constraints created by climate change and other environmental stresses.

The World Bank’s board understands this appointment is as much about transforming the bank as about reforming its selection process. In April last year, it declared that the next president should have “a proven track record of leadership; experience managing large organisations with international exposure, and a familiarity with the public sector; ability to articulate a clear vision of the bank’s development mission; a firm commitment to and appreciation for multilateral co-operation; and effective and diplomatic communication skills, impartiality and objectivity in the performance of the responsibilities of the position.”

The president will also need some other attributes. For example, we know that it is wise for international organisations such as the United Nations to have leaders from middle-sized countries because they do not unduly upset delicate geopolitical balances and they are more likely to understand the concerns of powerful and weak countries.

Based on this list of qualifications, there is an obvious South African candidate — Minister Trevor Manuel; but he is still building SA’s National Planning Commission. This is perhaps fortunate because it is time to select a woman as the head of the World Bank. A situation in which the leaders of the two most important international financial institutions are headed by women will send a powerful message about the importance of gender equity and the need for all countries to make full use of the skills of all their citizens. 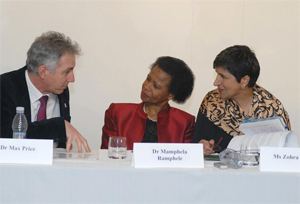 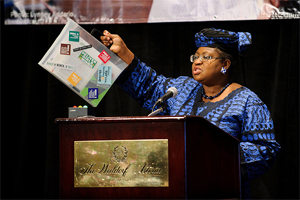 Two African candidates quickly spring to mind — former World Bank Managing Director, Mamphela Ramphele and Nigerian Finance Minister, Ngozi Okonjo-Iweala. Both are well qualified; they have had experience transforming complex institutions under difficult circumstances; and they have had experience working at senior levels in the World Bank. Ramphele has also worked in both big business and small grassroots development projects — the kind of hands-on experience the next president should have.

By leading an effort to appoint one of these two impressive women as the new World Bank president, our government can demonstrate creative leadership in the effort to promote global governance reform. It can also show Africa and our partner states in Brics the benefits that our leading role in international economic affairs can bring to them.

The deadline for nominations for the next president is March 23 2012. What are we waiting for?