How COVID-19 undermines democracy in Africa

As the recorded number of infections in Africa edges towards the six million mark, it has become clear that COVID-19 is not only a public health challenge.

Apart from the devastating economic impact of lockdowns and related regulations, the pandemic is undermining the well-being of democracy in Africa.

In prioritising public health, governments have drawn on emergency legislation to implement lockdown regulations. These measures narrow the gap between authoritarianism and democracy and can be used as a pretext for authoritarian regimes to hold on to power.

The pandemic struck at a critical time for some of Africa’s democracies and coincided with several elections scheduled for 2020 and 2021. Although some polls went ahead, others were postponed and rescheduled.

The health of democracy in Africa has been in question for some time and postponed elections can add to growing fears of democratic backsliding on the continent.

Postponed elections can threaten democracy in Africa for two reasons: moving an election is a controversial decision that can lead to instability, and uncertainty over whether elections will take place at all does not secure democracy.

Nowhere is this more evident than from Ethiopia’s June 21 parliamentary, regional state council and local elections. Rescheduled twice since August 2020, the postponements were not only a source of controversy, but are also linked to the conflict in the northern Tigray region after the Tigray People’s Liberation Front (TPLF) went ahead with elections in that region in 2020. Ethiopian Prime Minister Abiy Ahmed’s decision to postpone elections was interpreted by the TPLF as a move to extend his power, hiding behind COVID-19 public health concerns.

Further controversy arose after many opposition leaders were jailed, other opposition parties boycotted the polls, and constituencies in some regions were excluded from these elections based on security concerns and registration irregularities. Those regions will allegedly be voting in September 2021, but no elections are on the horizon for Tigray. This makes it hard to call these elections free and fair. Some experts believe that COVID-19 has “dramatically redirected Ethiopia’s political landscape deeper into authoritarianism”. Ethiopia is a key player in the Horn of Africa and the second most populous country on the continent. Its democratic trajectory is therefore of great importance.

Another case to consider is that of Senegal. Regional and local elections in Senegal have been postponed indefinitely from March 28, the third delay since 2019. Senegalese are already protesting the government crackdown on opposition leaders, corruption, and COVID-19-related economic decline. The Senegalese government responded with violence.

Postponing elections is not unheard of but the decision should not be taken lightly. Elections must take place within a specified period, usually five years. As a failsafe, an additional 90-days (usually) are factored in. If the time between elections exceeds this, a country can experience a constitutional crisis.

Delays can be interpreted by opposition parties as a move to consolidate power. Especially where elections have been postponed under states of disaster legislation during the pandemic, democracy has been rattled. Many governments have abused their additional powers. Freedom House reports that since the start of the pandemic, respect for human rights and democracy has deteriorated in 80 countries across the globe.

Abuses of power include violent crackdowns on protestors, experienced in Nigeria; detention or arrest of government critics, experienced in Zimbabwe; and social media blackouts and media restriction as experienced in Uganda, and Tanzania. To this list can also be added the recent government-sanctioned internet blackout in eSwatini during pro-democracy protests in the country.

It is also possible that proceeding with elections in the name of upholding democracy could have the opposite effect. Higher voter turnout is desirable since it is more representative of the voting population. Despite COVID-19 precautions implemented by election management bodies, citizens may still decide that the risk of infection from venturing out to vote at polling stations is too great and abstain.

Amid a security crisis and the pandemic, Mali proceeded with two rounds of legislative elections in March and April 2020. This combination of security and health threats meant only 23.22 percent of eligible voters turned up to cast their votes. More concerning than the low turnout is the confirmation of these results by Mali’s Constitutional Court.

Regular elections are the hallmark of democracy and allow citizens to voice their views on governments. But due to the COVID-19 pandemic, elections have been postponed worldwide at a rate not experienced before. The International Institute for Democracy and Electoral Assistance reports that between February 21 last year and June 21, 78 countries and territories globally have postponed elections citing coronavirus concerns.

African countries make up 17.9 percent of this total. The pandemic has created many new challenges for governments, not the least of which has been upholding democracy in conditions which call for social distancing and limited numbers of people gathering in groups. Indeed, finding a “democracy-human security balance” is proving to be one of the more complicated tasks facing governments during the pandemic.

COVID-19 could spark a global reconsideration of the electoral process, with remote voting options, such as online voting, enjoying renewed interest. It is important to remember that elections are not the only measure of democracy. Factors such as a level playing field for opposition parties, citizen choice as to whether or note to vote, voter turnout and a free public space are important indicators of the quality of democracy.

Elections are important and should be allowed to go ahead where possible. But what the pandemic teaches is that timing and safety are everything. 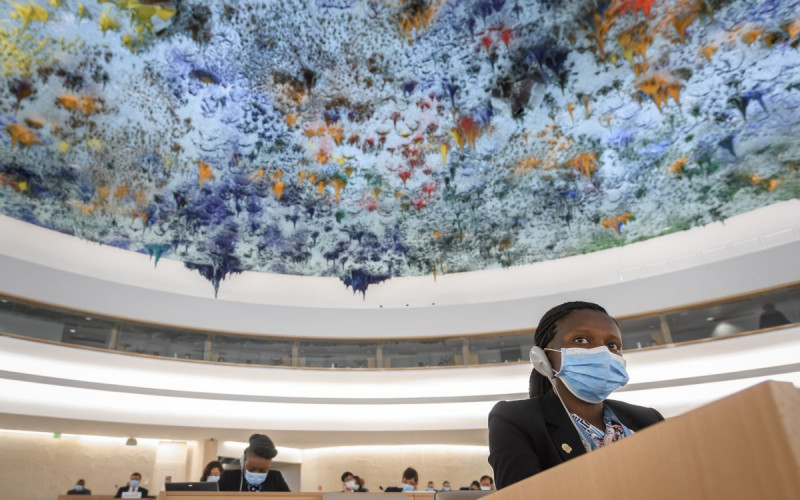 South Africa has failed to champion human rights in the world. But that’s changing