Libya: A lost opportunity for the African Union

In life realities on the ground often lay waste to the best-laid plans.

So has it been for the AU in the Libyan crisis. Since the rebels entered Tripoli on August 21 the hand-wringing around the AU’s marginalisation by Nato during the campaign has reached a crescendo. In that period, the Transitional National Council (TNC) has been recognised as the legitimate government in Libya by many states, including 20 from Africa; there has been a diplomatic flurry of activity on both sides of the Mediterranean with pledges for reconstruction assistance… and oil contracts; and the Libya Contact Group met in Istanbul – all this before the AU’s Peace and Security Council meeting on August 25 and 26. Has the AU lost another opportunity and how did it come to be much less important than the Arab League on the Libyan question?

First, although the AU had drafted a road map as early at March 10, it failed to win genuine support for it from both sides of the Libyan fray.

Second, the Arab League and Turkey’s support for Resolution 1973 provided, in Western eyes, sufficient legitimacy for Nato. Western and Arab interests coalesced in Libya. Resolution 1973 makes only scant reference to the AU, but emphasises the important role of the Arab League “in matters relating to the maintenance of international peace and security in the region”.

The resolution further notes that member states that have notified the secretaries-general of the UN and the Arab League are authorised to take “all necessary measures to enforce compliance with the ban on flights”. No mention of the AU. Should the three African states on the UN Security Council not have sought to insert the AU into that paragraph?

Third, once Resolution 1973 was passed by the UN Security Council, the AU failed to recognise that if it wanted to stay in the game it would have to escalate its diplomatic engagement (given its absence of hard power) not only with the Libyan parties, but critically with Nato, the Arab League and key countries such as France, the UK, the US, Turkey and Qatar. The Nato sorties, supporting the armed rebels, inevitably shifted the balance of power in Libya.

Fourth, it was extremely unlikely that the Europeans particularly would cede any political initiative to the AU – not only for the oil, but because Libya borders on the EU. African migrants have used Libyan shores as a springboard to enter Europe for a long time; the upheaval engendered by the Arab Spring across the southern Mediterranean exacerbated this, with the concomitant anti-migration backlash in Europe.

Last, while the AU’s Constitutive Act provides for involvement in members’ affairs where there have been gross violations of human rights, the fact remains that the AU lacks the political will (and often the means) to play hardball with some of its recalcitrant leaders who flaunt the very principles that the organisation is meant to espouse.

The West and Arab states were not going to rely on the AU. A drawn-out process of negotiation, while Gaddafi waged a war of attrition on the opposition, was not going to be permissible. Thus, once the “dogs of war” were unleashed, the AU’s road map lost any political capital it may have had as a credible alternative: ostensibly open to the AU’s overtures, Gaddafi would have stalled rather than negotiate himself out of power, and Nato’s entry meant that the rebels sniffed victory.

Lest we forget, Resolution 1973 was adopted in the face of an escalating brutal assault on protesters by an increasingly belligerent Gaddafi, who had failed to heed the calls from many quarters (including the AU) to cease military operations against civilians. Reforms had been promised several times but never carried out. In February and March Gaddafi calculated that the rebellion could be crushed. He was in no mood to negotiate with “rats”.

Furthermore, the Libyan uprising was part of the wave of grassroots uprisings against dictators (mostly West-aligned) that started in Tunisia. Even the Libyan leader had been rehabilitated in Western eyes a few years earlier. The cry in the Arab streets was for an end to these oligarchic regimes that had led to economic hardships. 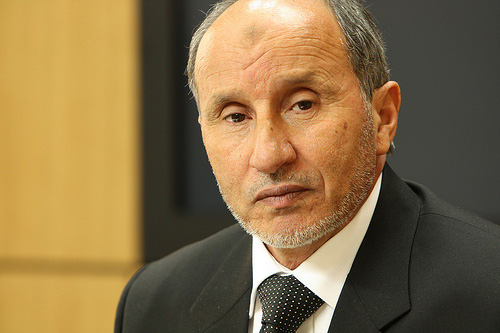 Ironies abound, of course: the Arab League’s membership is hardly a who’s who of democracy; the TNC’s democratic credentials still need testing; and Bahrain, where Saudi Arabia helped to quash protests against the state, is not the object of the same concerted international response.

“Regime change” was inevitable, but probably should not be articulated so unashamedly by Western powers, and the rebels have perpetrated crimes against civilians, too. Yet, these do not exonerate a megalomaniac dictator who did not realise that his time was up.

The AU often hesitates in condemning African leaders who use violence to obliterate internal opposition. Its intention may be to avoid escalation, but when is the right time to escalate the firmness of the dialogue and when is the time to use a combination of tools to effect an outcome? As the AU hopefully assesses its performance over the last few months, these are the tough questions it must seek to understand

The AU rightly opposes unconstitutional changes of government, but still has to resolve the dilemma of what to do with regimes that provide no real political space for opposition and political contestation.

So what should be the AU’s next steps? Its road map may still be relevant in principle, but developments have overtaken it. The Libya Contact Group has met. The “Friends of Libya” will meet in Paris on Thursday. The AU and six African states (including South Africa) are only observers at the Contact Group. The AU can’t expect to influence outcomes in Libya from the margins of the locus of power or by running a parallel process to that of the Contact Group. It should seek to integrate its high-level ad hoc committee into these processes.

It should also recognise the TNC. Not doing so quickly will make it more irrelevant in the post-Gaddafi Libya and unable to play a meaningful role in pushing for, as its August 26 communiqué said, “an inclusive transitional government, the establishment of a constitutional and legislative framework for the democratic transformation of Libya… and the national reconciliation process”. The latter should be linked to a transparent investigation of atrocities committed by both sides. At the Security Council, South Africa, with Brazil and India, should argue strongly for the UN to reclaim its central role in the process, as the Contact Group reports have argued. If the AU does not take these actions now, its objections to its marginalisation will become a self-fulfilling prophecy.