The Delta is Africa’s third largest alluvial fan after the Nile and Niger Deltas, and the continent’s largest inland delta. It is a permanent river body and flood-plain system that comprises of marshlands, extensive waterways, swamps, flooded grasslands and seasonally flooded plains.

In June 2014 Botswana’s Okavango Delta was enlisted as the 1000th UNESCO World Heritage Site – a status that underscores the Delta’s global ecological significance and highlights the need to protect and manage this important biosphere. September 2014 also marked the 20th anniversary of the signing of the Permanent Cubango-Okavango River Basin Commission (OKACOM) agreement that commits Namibia, Angola and Botswana, the three riparian states of the River Basin, to a coordinated and environmentally sustainable regional water governance strategy.

In 1996 the Okavango Delta was also declared a Ramsar Site, further highlighting its status as a wetland of global importance.

Despite widespread recognition of the Delta’s national, regional and global importance, unregulated, human-induced developments in the buffer and upstream zones could potentially disturb the delicate balance between the Delta’s climatic, hydrological and biological processes. Looking ahead, national and regional governance responses need to better reflect these new challenges.

Basin-wide planning and management must also include thresholds that demonstrate when water abstraction increases are above sustainable levels. The need for socio-economic development at the national level must form the basis of any Basin response, whilst at the same time not compromising the long-term preservation of the Cubango-Okavango River Basin.

The Okavango Delta: Africa’s largest inland delta
Originating from the Angolan highlands, the Cuito and Cubango Rivers meet between the borders of Namibia and Angola to form the Cubango-Okavango River, before flowing through the panhandle and spilling into the Okavango Delta in north-western Botswana. The inflow from the Delta forms a set of evaporation pans in the Kalahari Desert, principally the Makgadikgadi Pans fed by the Boteti River.

The Delta is Africa’s third largest alluvial fan after the Nile and Niger Deltas, and the continent’s largest inland delta. It is a permanent river body and flood-plain system that comprises of marshlands, extensive waterways, swamps, flooded grasslands and seasonally flooded plains. The Cubango-Okavango River Basin stretches approximately 700,000 km2 and is unique in that its native plants and animals have synchronised their biological cycles with the annual flooding from the Okavango River, which occurs during the dry season.

An area of immense socio-ecological significance
The Delta is known for its rich, globally-significant biodiversity. It is an important staging post for bird migration to Southern Africa and substantial populations of large mammals reside in the Delta, including some of the world’s most endangered species. The Delta is also home to the world’s largest population of elephants, numbering around 130,000.

Rural communities located along the periphery of the river system in all three riparian countries are characterised by low levels of socio-economic development. Their livelihoods are largely dependent on the ecosystems services provided by the river’s system such as water, fish, land for small-scale agriculture, lush vegetation for grazing, reeds for thatching and important medicinal plants.

The Delta is also a prime wildlife tourist destination, providing employment opportunities to approximately 60% of people located in the area. Tourism is currently the second largest contributor to Botswana’s GDP, generating US$866 million and supporting 49,500 jobs in 2012.

However, the riparian countries derive varying amounts of benefits and incomes from the water system. Although the majority of the Basin’s water originates in Angola and it has the largest population of the three Basin states, it generates less income from the river system than Botswana, the member country that generates by far the most income from the basin system. 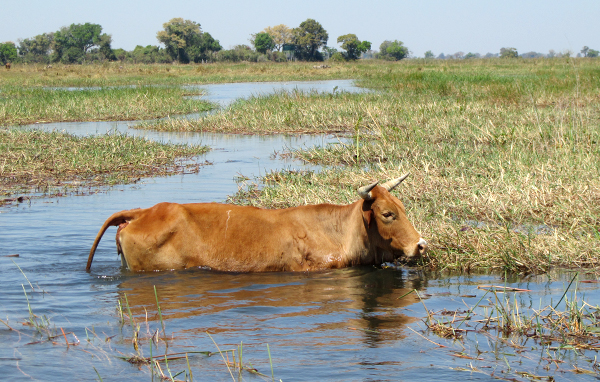 Because Botswana’s economic future is inherently linked to the successful conservation, protection and sustainable management of the Delta and its associated ecosystems, the government of Botswana has implemented a number of policies to manage and preserve the Delta. About 40% of the Delta area is protected within the Moremi Game Reserve, and the remainder is composed of Wildlife Management Areas, managed by community trusts or private tourism concession-holders. The buffer zone is communally-owned and falls under various local Land Board authorities. These peripheral areas are earmarked for sustainable utilisation and are of great importance to the productivity and health of the Delta’s environmental services. Botswana’s priorities and concerns are included in its Okavango Delta Management Plan (2008) and its more recent National Action Plan (2011-2016).

An ecosystem under threat
Despite the impetus for the conservation of the Delta, there are still numerous challenges that threaten its preservation. Potential upstream developments in Angola and Namibia can pose risks to the hydrological functioning of the Delta’s entire Basin system, and if not regulated appropriately, can decrease the capacity of the system to be biologically productive, store and filter water, replenish groundwater and perform flood control functions. Any development that could cause a variation and reduction of hydrological flow, increase sediment yield, alter the abundance and distribution of fauna and flora, and/ or cause a deterioration of water quality in the Delta, needs to be carefully considered by OKACOM and member countries.

This is particularly urgent given some of the proposed developments in the near vicinity of the Delta and its upstream tributaries. Proposed plans include large-scale irrigation schemes and commercial agriculture; and mining and proposed water storage projects. Also unauthorised water abstraction and pollution is taking place in all three countries and deforestation and overgrazing are causing ecological destruction in the buffer zone.

Pressures on the Delta are also likely to increase given the growth of the region’s population, which is expected to reach 1.28 million by 2025. Climate change-related impacts are also expected, such as increased temperatures and changes to rainfall patterns. 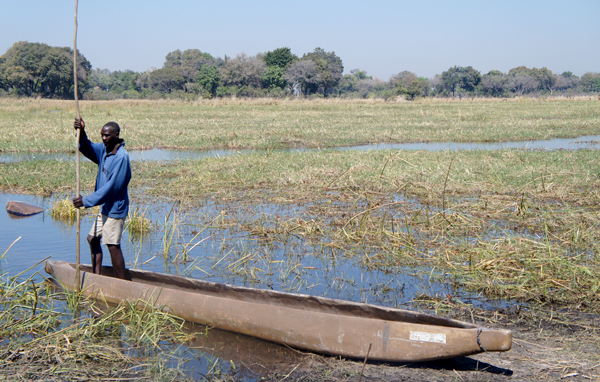 Regional governance response
Riparian countries recognise the urgent need for a strong regulatory framework that encourages cooperation, planning and basin-wide management. OKACOM was established in 1994 as a ‘cooperation, coordination and information-sharing platform’ to encourage an integrated response to the management of the Basin’s water resources and to reduce unsustainable national activities.

Continued and deepened cooperation is essential to ensure that thresholds for the entire system are established and respected, so that the speed and scale of national development activities do not exceed the capacity constraints of the system. To inform the factual basis of these management decisions, the Okavango River Basin Transboundary Diagnostic Analysis (2011), and its associated Integrated Flow Assessment (IFA), were undertaken. The TDA provides the technical transboundary information for basin-wide planning.

OKACOM’s Strategic Action Programme (SAP), developed in 2010 and to be implemented over the next 20 years, is a joint strategy that lays down the principles and strategic direction for the development of the Basin. It seeks to avoid the loss of ecosystem services and wetland functioning by curbing unregulated upstream developments and managing unsustainable changes in land and water use. The SAP informs the National Action Plans (NAPs) of Botswana, Angola and Namibia. NAPs are the national implementation documents that define the specific, time-bound interventions of each riparian country, in response to the SAP priorities. The NAP is designed to be reviewed every 5 years, along with the SAP and the TDA. 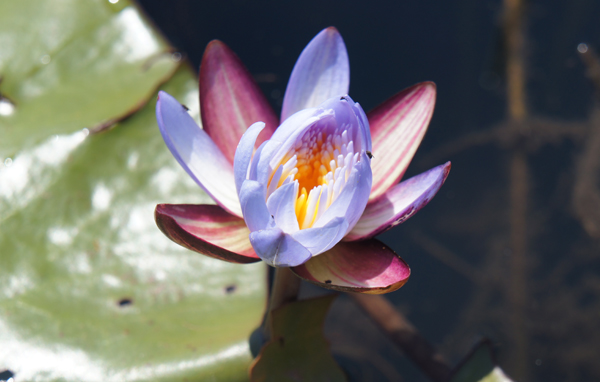 These tools and policies help OKACOM assess the environmental and socio-economic threats to the Basin, focusing on the relationship between current and future water use and hydrological flow, and identifying thresholds and the scope of ‘acceptable development space’. In addition, a Strategic Environmental Assessment has been undertaken and an associated Action Plan for the upstream Basin drawn up to better integrate land and water resource planning.

Conclusion and recommendations
OKACOM has achieved 20 years of sustained cooperation. This is significant as a successful model of trans-boundary natural resource management for the region. OKACOM provides useful lessons to address the governance of similar, cross-border land-use and biodiversity concerns. It also provides regional examples of state stewardship of natural resources at a national level.

This anniversary provides the opportunity for OKACOM to take account of its achievements thus far but also to deepen regional cooperation in light of new threats in the buffer zone and upstream. Built into its future vision, OKACOM must reflect the Basin’s competing water interests and guide member states on how best to manage them. OKACOM’s ability as a mediating body will become increasingly tested as it attempts to ensure that national development interests and plans are recognised without threatening the integrity of the entire Basin system.

Going forward, OKACOM’s Basin management plan and associated NAPs needs to be effectively implemented and aligned closely to the UNESCO World Heritage and RAMSAR priorities for the Basin. In addition OKACOM can consider regional financing structures, such as payment for environmental services schemes that could enhance the economic gains from the Cubango-Okavango River Basin to all member countries, and compensate riparian states countries for non-development when conservation is in the regional collective interest.

With the recognition that all interventions must enhance basin livelihoods and national poverty alleviation priorities, OKACOM activities must continue to encourage alternative, more sustainable eco-tourism and community-led conservation initiatives. Maintaining the Delta’s near-pristine status is important for ensuring that the wetland continues to provide significant ecosystem benefits to riparian states and their communities, as well as to the global community at large.

However, the successful management of the Delta will be determined by regionally coordinated strategies that effectively balance conservation with economic, social and development priorities.

Romy Chevallier and Megan Bybee recently completed a field visit in Botswana focusing on three streams of inquiry: firstly, a focus on Botswana’s economic diversification from diamonds to other minerals such as coal and iron-ore, and its potential environmental impact on the Okavango Delta, with iron-ore prospecting taking place in the proximity of the Delta’s buffer zones; secondly, an exploration of Botswana’s experience of community participation in conservation initiatives in the Delta; and thirdly water governance and international cooperation over the Cubango-Okavango River Basin.