For example, during the 2012 United States presidential elections, the Barack Obama campaign launched a smartphone app so users could register, donate and link up with like-minded supporters. The use of online communication is also reaching beyond open democracies to places where fewer political avenues exist. China’s retiring premier Wen Jiabao has had live web chats with the public since 2009. When public sentiment rose against Iran’s leadership, its government, in response, began promoting patriotic ideals online.

South Africans are also increasingly using new media platforms. The first Twitter map of Africa, by Portland Communications, shows South Africa as home to the most active tweeters on the continent. The 2011 census indicates that about 90% of the population own mobile phones — on which the internet is available — a sharp increase from the 32% who owned them in 2001.

So the number of people who will overcome the physical barriers to wireless engagement can only increase.

But this does not always translate into more political engagement. Social media tools become what we make of them. At the moment, neither the South African government nor the public are using social media as vigorously as elsewhere.

Minister of Public Enterprises Malusi Gigaba is one of the few politicians who uses his Twitter account to post new developments and speak to the public.

The presidency’s Facebook page regularly posts new information but, until I sent queries for this article, there was virtually no response to users’ comments, queries or criticisms.

Leadership will have to engage with the maturing born-free, post-1994 generation — an important constituency less motivated by memories of the liberation struggle and more fixated on socioeconomic delivery.

The ANC has signalled its intention to use social media in the 2014 elections. The Democratic Alliance launched its social media strategy in 2009.

The recent entrance of social activist Mamphela Ramphele’s Agang into the party-political arena raises further possibilities: she has declared her willingness to consult citizens, a process that could be accelerated by social media.

But South Africa is deeply divided into different cultural, language and socioeconomic groups, which shows in the way wireless technology is used. Wealthier users regularly comment on issues but that does not mean their opinions translate into political action.

According to the author-journalist Malcolm Gladwell, network societies work because they are efficient, but they lack consensus and rarely ask users to forfeit anything or to do much more than hit the “like” button.

Still, as a University of the Wit­watersrand report, The New Wave, shows, a new group of internet users has emerged. They are young, black and from a low-income group. For now, they tend to use the internet in basic ways: for quick information and to socialise. That, however, is likely to change over time.

As the political leadership adapts to new public diplomacy strategies, citizens will acquaint themselves more and more with new technology. The pieces of the game exist but the users ultimately make the rules.

The Role of Public Sentiment and Social Media in the Evolving China–Africa Relationship
by Yu-Shan Wu
SAIIA Occasional Paper No 134, January 2013 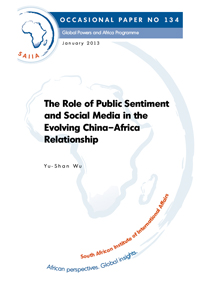 The demands of public diplomacy have shifted with the development of social media technologies. Increasingly, governments are required to gauge and respond to public sentiment over and above the one-way communication of broadcast media. The social media and accompanying elevated public role have complicated the decision-making process in China to the extent of potentially influencing its outward engagements. On the receiving end of China’s diplomacy is Africa, which is undergoing its own important technological changes. South Africa’s domestic circumstances, however, demonstrate that larger factors can override online sentiment. In two such important regions in the world, it is important to consider whether these domestic changes are likely to strengthen or undermine future China–Africa future relations. 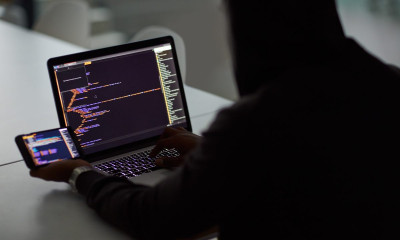 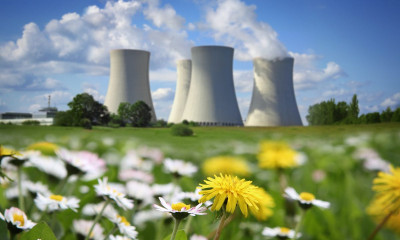