South Africa’s audacity of hope? The geopolitics of consensus and rivalry in the African Union

Arguably, the renewed interest in Africa in the last decade, characterised by the commodity boom and fuelled by the rise of China and India, has brought a fresh set of challenges for the continent at a time of great power flux.

Periods where a dominant power is in relative decline and dauphins emerge have historically brought with them instability to the international system, if not all-out war. Africa, its resources and huge economic and consumer potential will be a focal point as these geopolitical and economic shifts play themselves out. This points to the likelihood of more, not less, foreign involvement.

South Africa’s bid to take over the chair of the African Union Commission used as its departure point that the increasing incidents of ‘foreign interference’ in Africa required a leader at the AU able to chart an independent course. South Africa was referring here specifically to the way in which it perceived a French hand in the conflicts in Côte d’Ivoire, Libya, and Madagascar, which had seemingly outsmarted the AU or marginalised its role.

There are two related questions in the wake of the inconclusive outcome to the election at the 18th AU Summit in Addis Ababa in January 2012. First, what role can or ought the AU to play in this fluid global environment? Second, how ought SA to shape its engagement in Africa and beyond as a regional power and global actor?

The Libyan crisis last year illustrated that the AU was indecisive, divided and lacking the nuanced diplomatic appreciation of power dynamics that might have allowed it to play a more decisive role alongside NATO. Some of these weaknesses can be ascribed as much to personalities (e.g. Jean Ping, as South Africa has argued) as they can be to the actual and putative powers of the AU Commission.

The AU models itself on the European Union, but its powers and capacities are infinitely smaller. A continental commission without substantial decision-making powers inevitably becomes sidelined in a crisis, where other bodies are quicker off the mark. More fundamentally, there is the dilemma of articulating a decisive ‘common voice’, when the commission has to aggregate the interests of 54 member states, each with their particular demands and agendas.

Unavoidably, regional rivalries will manifest themselves in the AU, and were overtly present in Addis Ababa in January. Such rivalries can never be totally eradicated. However, a potentially more disruptive trend for the future of the AU as an effective body is the ongoing political instability in key African driver states. The EU’s success has long been ascribed to the central role played by France and Germany in driving integration. In Africa and its regions, instability plagues Nigeria and Senegal in west Africa; Kenya in east Africa; and Egypt and Libya in north Africa. With their eye on maintaining internal stability, can these driver states truly contribute to strengthening the continental institution? And are their leaders committed to such a cause or simply content with the status quo?

Apart from these political challenges, the AU’s problems are also of an organisational nature and require the building up of its institutional capacity, including its human resources.

A first step for the AU in tackling these issues would be:

• to improve its internal capacity and fill vacancies based on merit, rather than purely on regional indicators or historic sentiment;

• to revise the rules around the election of the Commission, but also its key performance indicators, recognising of course that this is not an apolitical exercise; and

• to be modest and realistic in what the AU can achieve given its size and the divergent interests of its members in articulating a common foreign policy (the EU still struggles in this regard too).

The more fundamental question is whether the AU can be the vanguard ‘protecting’ Africa from foreign interference, and identifying what course Africa should follow in navigating through the competing interests of emerging and established powers. Even a highly competent and bold leader of the Commission would battle to achieve the former while ensuring consensus across 54 member states. After all, South Africa’s position on Côte d’Ivoire was diametrically opposed to that of the Economic Community Of West African States (ECOWAS) and Nigeria specifically, who supported the position of the United Nations (and by extension the involvement of UN troops) that Alassane Ouattara had won the elections and ought to be recognised as the legally elected president of the country. A similar situation was obtained with the way in which certain African states broke ranks with the initial AU position on non-recognition of the Libyan National Transitional Council after Muammar Qaddafi’s fall.

For the AU to play a ‘vanguard’ role, it would require a core group of states representative of its regions, who share values and have developed a common strategy and set of tactics to tackle politically contested issues. This seems utopian at the present for all the rhetoric about African unity and solidarity. Yet, the European experiment that forged amity between erstwhile bitter enemies in the post-World War Two years is the enduring lesson supporting such an endeavour, long though it may take.

This brings us to South Africa’s part in this enterprise. The country has invested much in establishing Africa’s institutional architecture since 2000. Yet, it is common cause that it is underrepresented in the AU structures.

Many analysts and officials inside and outside South Africa will argue that the country is a natural leader on the continent, with its hard and soft infrastructure, economic strength, and willingness to take on regional and global issues. Its diplomatic engagement with other African states has generally not resorted to bullying tactics or contrarian positions. However, under President Jacob Zuma this is starting to erode. Côte d’Ivoire and Libya are the two cases that define the 2011 landscape and no doubt haunted SA’s bid for the chairmanship of the AU Commission.

Although not regarded as a foreign policy president in the mould of a Thabo Mbeki, President Zuma and his administration successfully lobbied for South Africa to join the BRICS, steered SA into a second term as a non-permanent member of the UN Security Council, held firm on many elements of the roadmap in Zimbabwe, and played a key role in the transition to an independent South Sudan. 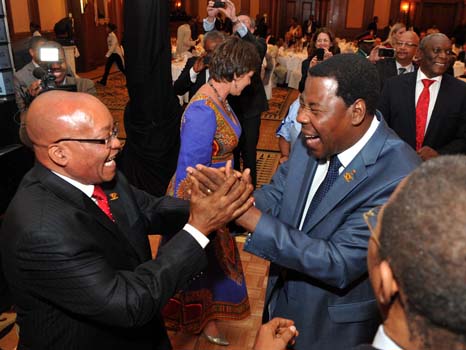 President Zuma’s foreign policy team has not been shy to emphasise that SA covets a permanent seat on the UN Security Council.

The white paper on foreign policy published late last year explicitly noted that ‘a number of regional trends could combine to result in challenges to South Africa’s regional leadership position’ – a rare public admission by the government that SA has rivals within the continent, that African brotherhood stops once it begins to threaten core interests and that the rhetoric of solidarity masks real competition among states. If this interpretation is correct, then South Africa’s contesting of the AU chair was a shot across the bow, signalling South Africa’s intention to be more assertive in its engagement with African institutions and the continent.

Has the country finally shorn itself of its coyness in assuming the leader’s mantle? Was it audacity or a well-calculated strategy to overturn the status quo and unsettle things a little? If the responses of the SA delegation were indicative, it was clearly the latter – irrespective of its inconclusive nature SA’s bid unseated the incumbent. Perhaps the most important outcome was that SA’s bid may introduce a new way of public contestation in the AU, eschewing, at least for the time being, the approach that elevates consensus to a higher good. Furthermore, incumbency often creates complacency and inertia. Competition can stimulate action and innovation. If the AU is to live up to the aspirations of its founders and to its own Constitutive Act, it will need more of the latter and less of the former.

SA should draw the lessons from this diplomatic foray about how to execute its international relations in Africa. If SA perceives its core mission as containing foreign interference in the continent, what does that mean in practice, and what types of foreign interference are to be avoided? Clearly, SA’s AU campaign was referring here to the high politics of political choices and intervention, not the low politics of trade and investment relations. But whether foreign interference is welcomed by Africans or not becomes difficult to determine when there is a confluence of interests between certain African and external players.

While Jacob Zuma’s presidential diplomacy has paid more attention to SA’s bilateral relations with African states, the extent to which this has borne fruit is still to be determined especially with African regional powers. It is also the curse of big states like South Africa that size and dominance often preclude them from contesting certain positions in continental institutions. The AU elections demonstrated that fear of a ‘big brother’ trumps the merits of a candidate. While an argument can be made for a strong state to lead weak institutions, there are valid concerns about domination by one state of a continental agenda. Again lessons can be drawn from the way in which European institutions operate, where it is rare for the two drivers – France and Germany – to hold the top bureaucratic positions (the notable exception being the Commission presidency of Jacques Delors in the 1980s and early 1990s).

So how should a big state lead on the continent? Dominant states can use any number of soft tools to influence an agenda. SA could adopt Obama’s approach and ‘lead from behind’ by utilising its diplomacy to build alliances with both small and medium-ranked states that are based on shared values and a vision of the AU as a more professional, capable and decisive institution that is true to the letter and spirit of its founding values. In setting this as an objective, SA could pursue strengthening SADC operationally and in terms of its authority, as a model for such a project. For the wider continental project, SA should also not neglect building alliances with one or two other continental powers to create momentum that would drive the process. The attainment of these objectives does not need a South African at the head of an organisation, but certainly one that shares the vision, and recognises that while geopolitics still determines rivalries among states, in the 21st century learning to cooperate to generate regional and global public goods is an imperative, not a ‘nice-to-have’. That would be SA’s audacity of hope.