Since 1994 the erstwhile Department of Foreign Affairs, renamed International Relations and Co-operation in the wake of the ANC’s 2007 National Conference in the Polokwane, has had a series of strategy documents.

These reflected the thinking and policy preferences of succeeding ministers, senior officials and heads of South Africa’s diplomatic missions in conclaves. In recent years, these have appeared on the DIRCO website with the title ‘Strategic Plans’ projecting policy proposals for three years ahead. The most recent Plan on the website related to the period 2010 – 2013.

The Minister of International Relations and Co-operation in President Jacob Zuma’s cabinet, Maite Nkoana-Mashabane, has opted for a more inclusive process of consultation with business, academia, labour and broader civil society. The resulting document, styled a ‘White Paper’ was approved by Cabinet before being submitted to Parliament as a policy proposal defining the proposed way ahead. Formally involving Parliament in this way is new and commendable.

This openness is very different to the way government operated during the presidency of Thabo Mbeki, where policy-making was concentrated in his Presidency.

The White Paper emerged, seemingly miraculously, as it does not yet appear on the Department’s website. It bears the date 13 May 2011 and is marked “final draft”.

Grandly titled “Building a Better World: The Diplomacy of Ubuntu” it proves to be a rather mechanical rehash of existing foreign policy. As one reads though it the same terms are repeated almost ad nauseam.

The draft, if that is what it is, trots out all the clichés, like Ubuntu (meaning “humanity towards others”), Batho Pele (meaning “putting people first”; an initiative by the South African government to enhance delivery and quality of public services). There are also the platitudes about national interests, without saying how the lengthy list of objectives will be achieved.

There are a few important new initiatives.

We have been aware for some time of the intention to create the South African Development Partnership Agency. This is an attempt to channel South Africa’s development assistance through a single agency, in order to have a record of assistance provided by all government departments responding to requests from counterparts in other countries in their areas of responsibility. Until now it has not proved possible to determine at a central point what the cost of such assistance has been or which countries have benefitted.

Nor was there the opportunity to use development partnerships (the term ‘foreign assistance’ is considered politically incorrect) in a tactical manner to promote South Africa’s interests.

Taking openness to the next level, the White Paper foresees the creation of a South African Council on International Relations as “a forum for interaction with the Department on foreign policy development and implementation, with the aim of creating dynamic partnerships for development and cooperation.”

Welcome as this proposal is, there is no indication about how the SACOIR is to be constituted or how it will operate. It is hoped that it does indeed get off the ground and does not simply fade into oblivion, never to be heard of again, as has been the fate of similar proposals in the past.

The key focuses of South Africa’s foreign policy, the African Agenda, South-South Co-operation, North-South Dialogue, Multilateral and Economic Diplomacy, and bilateral relations with individual countries, have been listed on the DIRCO website for years. Nothing new here. Nor is there any attempt to identify the countries which are of special importance to South Africa in promoting its interests. 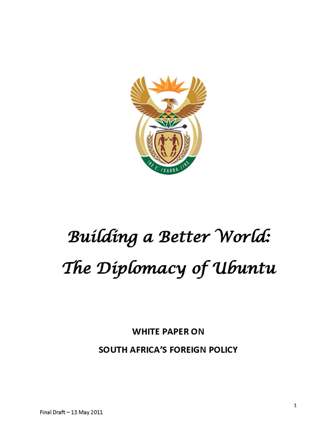 South Africa’s current foreign policy has been described as “care and maintenance” of what was created during the Mbeki presidency. The White Paper does little to disabuse that characterisation.

The floundering that has characterised South Africa’s handling of the crises in Cote d’Ivoire and Libya seem to bear no connection to the White Paper.

External players over whom South Africa has little or no control bring factors and issues to bear which require inspired and wise leadership from our politicians to handle.

Which goes to show that foreign policy is not as easily defined or implemented as education or health policy. It is not within the exclusive control of domestic actors – politicians and officials.

Unlike White Papers issued by other department of state, the DIRCO document will also not lead to the introduction and adoption of new legislation to guide its implementation.