The effectiveness — or, for that matter, the existence — of Russia's soft power has always been a controversial topic, dividing both academic and policy researchers. Now, with Moscow's invasion of Ukraine, talking about Russia’s soft power may sound like fiction – even more so from Europe’s perspective. However, this is not the case when it comes to Africa.

Although Russia relies heavily on force and economic power, ignoring Moscow’s “power of attraction”only provides a partial vision of its power strategy. This is all the more dangerous in contexts where a country is attempting a “comeback” to return to the foreign policy stage, from which it had long been largely absent, with strategies and developments still unclear.

Such is the case of Russia’s “return” to Africa, which implies there must have been a departure. Indeed, during the 1990s, Africa was no longer considered a foreign policy priority for Moscow, which was struggling with enormous domestic issues related to the USSR’s collapse.

Only throughout the early 2000s, with Vladimir Putin’s rise to power, Russia began its discreet comeback to the continent. This return has gained more traction in recent years, to the extent that Russia has also been trying to recover some of the Soviet Union’s soft power as part of its toolkit to gradually rebuild influence across Africa.

What does Russia’s soft power look like in Africa?

Common cultural soft power sources used in the West (literature, classical music, ballet) do not seem particularly influential in Africa, possibly owing to the continent’s own diversity of culture and language, as well as geographical distance from Russia. Furthermore, Russia has also invested less in cultural centres compared to China, both in Africa and elsewhere.

However, Russia’s declared political values – multilateralism, anti-imperialism, and non-interference – are particularly well received by policymakers across the continent, despite failing to be upheld in Russia’s own neighbourhood. They relate mainly to the country’s past and current anti-Western stance.

In Africa, Russia’s most powerful soft-power asset relies on its image as an independent, pragmatic, and assertive actor. Moscow’s allure is based on its image as a global player that can stand up to the West, insists on domestic values against foreign interference, and is ‘open for business’ with all countries, regardless of their government or level of democracy.

Such anti-Western image draws — and capitalises — on Russia’s Soviet past, even if the ideological element that was so prominent in Soviet times is now missing. But the Soviet legacy is also visible in the effort to influence elites through education. During the Cold War, over 50,000 African students studied in the USSR thanks to Soviet scholarships, and that is likely to have influenced alumni’s worldviews and political sympathies, despite the Soviet ‘defeat’ at the end of the Cold War.

A relatively novel feature is Russian media presence, chiefly RT (previously, Russia Today) and Sputnik. Both Kremlin-funded media outlets, which publish and broadcast in English, French, and Arabic, are commonly accused of spreading ‘pro-Russian narratives’ and were even banned from broadcasting in the EU on the 8th of March 2022. As a result, RT was removed from Multichoice’s satellite television bouquet in Africa.

In the African context, common RT and Sputnik narratives range from Russia being a friendly country bringing peace and prosperity to Africa, to a more general Western bashing of former coloniser countries still engaging in ‘imperialistic behaviour’. A 2018 report commissioned by both the French Ministry of Foreign Affairs and Defense finds that majority of new RT France subscribers come from the Maghreb region and sub-Saharan Africa countries and that African online news websites are increasingly relaying content from Kremlin-sponsored media. For example, many of Sputnik’s articles on Africa are picked up by seneweb.com, Senegal’s fourth most visited site with over 1.5 million Facebook subscribers.

Does all this automatically translate into support for Russia’s policies and worldview? It’s hard to say. Measuring the effectiveness of an immaterial element such as soft power can be methodologically complex.

So far, there has been a huge divide among scholars and observers: while some are optimistic about the actual leverage of Moscow’s soft power in Africa, others deem it limited or non-existent. And yet the ‘African dimension’ of Russia’s foreign policy is potentially attractive, at least to some countries’ elites or social groups, especially those opposing the West and/or its democratic conditionality.

Moreover, several sub-Saharan African states find Russia a mighty and attractive provider of political and security services, useful to diversify their policy options and prevent overdependence on China or former colonisers such as France. A case is point is Mali, where Russia has largely maintained a force of about 1,000 Russian officials and instructors from the Wagner Group even after the invasion of Ukraine, which required some of these mercenaries’ deployment to the Donbass region. Moreover, Russia’s deputy UN ambassador, Anna Evstigneeva said that 200 Malian servicemen and nine police officers are currently being trained in Russia.

How do African states perceive the war in Ukraine?

It is interesting to look at how African states perceive the Ukraine conflict, which first erupted in early 2014, then turned into a low-intensity conflict before Russia’s full-scale invasion of Ukraine at the end of February 2022.

Initially, Ukraine made fewer headlines in Brazil or South Africa than in the EU and US, with BRICS states adopting a pragmatic approach based on realpolitik with the objective of not upsetting Russia. As one high-level African official told me in an interview, Africans look at the crisis through the lens of their own history of suffering at the hands of Western-inflicted mistakes.

Such readings may point to the effectiveness of Moscow’s use of anti-Western narratives – particularly its image as a country boldly defending its interests against Western interference.

However, it is unclear whether the latest escalation, which is already proving to dramatically impact global oil and food prices, will change this approach.

For the time being, most African countries seem to be siding with Ukraine. At an emergency meeting of the UN General Assembly held on 27 February 2022, over half of voting African countries (51,85%) supported a non-binding motion condemning Russia. However, though only Eritrea voted against the resolution, nearly a third (17 out of 54 countries, including South Africa) abstained from voting, likely not to spoil their relationship with Moscow.

While developments are still unfolding and it’s too early to make assessments, the second Russia-Africa summit, scheduled for this November, will provide a good occasion to test the state of relations – and whether Russia is still attractive to African countries.

“This op-ed is based on a publication available here: Russia’s Soft-Power Sources in Africa 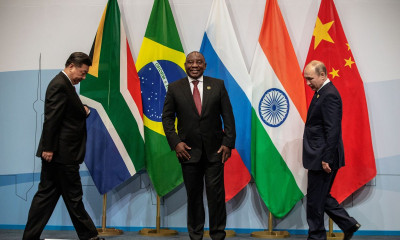