There are two seemingly obscure consequences of 11 September 2001 attacks on the United States that do not receive the attention they deserve in public debate.

The first is the rapid advances made in the field of unmanned weapons systems. The second consequence reflects on the role of covert operations in the murky realm of counter-terrorism operations. Ten years ago, US armed forces operated, by some calculations, between 50 and 100 Unmanned Aerial Vehicles (UAVs). Today, the New York Times estimates that the Pentagon operates about 7 000 of these weapon systems.

As the U.S. war effort unfolded in Afghanistan in 2001 and in Iraq in 2003, the Bush era’s Global War on Terror (or ‘Long War’, as some chose to define it) forced the Pentagon, the Central Intelligence Agency (CIA) and other security agencies to adapt to fighting a new “network-centric” or asymmetric war.

In order to fight al-Qaeda and the Taliban, and to achieve counter-insurgency and counter-terrorism objectives in Iraq, the Pentagon quick-marched new robotic weapons systems into lethal action. As pitched battles unfolded in the mountains of Afghanistan and urban guerrilla warfare turned Baghdad’s streets into death traps, the UAV quickly proved itself capable of spying, monitoring, and striking down adversaries from a comfortable distance.

UAVs, also referred to as drones, take many different forms and range from small remote-controlled helicopters and aeroplanes that act as the eyes and ears of military units on the ground, to massive flying machines ominously named Global Hawk or Predator-7. For example, predator UAVs can carry Hellfire missiles, and are equipped with sophisticated camera and sensor technologies to provide over-the-horizon surveillance. A Predator prowling in the skies above Afghanistan, or of late in Libya as part of NATO’s mission to enforce a no-fly zone, can be controlled, remotely, from offices in the US.

A measure of how the UAV has come to play a central role in American war efforts since the 9/11 attacks, can be found in the number of strikes carried out by these robotic weapons systems. The Long War Journal keeps track of US UAV strikes and estimates that between 2004 and 2011 the US conducted a total of 264 airstrikes in Pakistan alone.

However, the number of those killed in UAV airstrikes is not the only significant phenomenon associated with the rapid deployment of these robotic weapons. The justification for the development and deployment of unmanned weapons systems pertains to the need to prevent the loss of soldiers in battle. A further advantage of robotic systems is that, compared to the cost of training pilots, as well as building, maintaining and deploying conventional fighter jets, the UAV is becoming a more cost effective weapon of choice for military commanders. 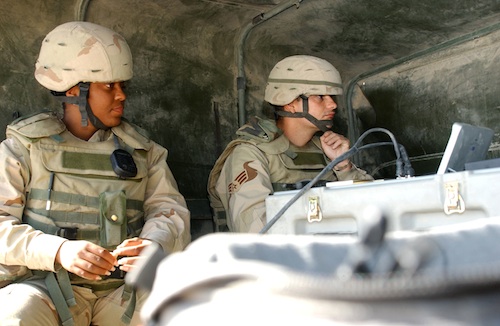 The wars that erupted in the wake of 9/11 thus indicate that UAVs have become ubiquitous and indispensable. The rapid advances made in the development and deployment of unmanned and robotic weapons systems have already revolutionised 21st century warfare.

Given the political impact that the loss of soldiers in foreign wars has on US public opinion, unmanned systems guided by remote control, minimise such risks and give security agencies and the armed forces a distinct advantage over their enemies.

In response to US advances in the field of robotic weapons systems, Russia and China are sinking ever growing proportions of their research and development budgets into developing their own unmanned robotic weapons. It therefore appears that one of the unintended effects of 9/11 is a 21st century unmanned weapons system arms race.

But there are several ethical questions. In October 2010, Professor Christof Heyns, a South African professor of law and United Nations Special Rapporteur on Extrajudicial Executions, raised a red flag. In a report to the UN General Assembly Human Rights Committee, he contended that the international community should address the legal, political, ethical and moral implications of lethal robotic technologies. Prof. Heyns is not alone in raising concerns about the use of these weapons. His predecessor at the UN, Philip Alston, called for a halt to the CIA’s drone strikes in Afghanistan and Pakistan. Although UAV strikes in these countries are considered one of the major instruments the US has used to fight al-Qaeda, the secretive nature of these operations, and the ‘kill lists’ on which they are based, could be interpreted as extrajudicial executions.

Remote-controlled weapons remove human operators from harm’s way, but, the result is that the act of killing at a distance introduces new risks. One risk some analysts refer to is the ‘Playstation syndrome’ where operators are physically and psychologically detached from the battlefield. Further questions regarding the impact of unmanned systems on political decision making regarding conflict should also be raised. If a country risks putting living and breathing soldiers in a dangerous environment it may think twice before launching an offensive. The political cost of losing a drone is far smaller than the risks attached to losing soldiers in battle. The increased use of unmanned weapons systems thus minimises domestic risk for political leadership, while increasing the risk to others.

Since the September 11 attacks, the focus of counter-terrorism operations in Afghanistan, Pakistan and in Yemen was not only to eradicate al-Qaeda, but also to gather information on the whereabouts of its leader, Osama bin Laden. If there is one lesson that the high tech intelligence driven community in the US has learned in the aftermath of 9/11, it is the value of human intelligence. The hideout of bin Laden was pin-pointed by intelligence on the ground, and not by spy planes or satellites.

The Joint Special Operations Command (JSOC) had two options: either arrest or eliminate bin Laden. Elimination could have been done remotely by UAVs; arrest and intelligence gathering were only possible by the deployment of Special Forces operatives. The JSOC chose the latter and the image of Barack Obama and his senior staff watching the operation live on television screens, were broadcast throughout the world (pictured, above. Supplied by The White House in May 2011). The soldiers chosen to conduct this operation were the Navy SEALs, who were originally formed to conduct rescue operations in enemy territory but have grown into a formidable ‘secret army’ since 9/11.

In a recent interview with the Washington Post, a Navy SEAL described his unit as follows:

“We are the dark matter. We’re the force that orders the universe but can’t be seen.”

The Navy SEALs are part of the JSOC and it is reported that they have been active in countries such as Yemen, Pakistan, Somalia, the Philippines, Nigeria and Syria. The JSOC has the authority to select individuals for their kill-lists. In effect, the JSOC is in breach of not only US laws, but also international laws that prohibit assassinations. Before 9/11 the JSOC could only call on 1800 dedicated troops, but since the 9/11 attacks on Washington and New York, their numbers have grown to more than 25 000. Admiral Eric Olson, commanding officer of Special Forces, stated that since 9/11 the demand for elite soldiers skyrocketed and that more than 60% of all Special Operations soldiers joined after the attacks on the US. He goes as far as to say that most of them were inspired to join these elite units because of the terror attacks.

Lieutenant General David W. Barno, USA (Ret.) said in the New York Times, “Ten years of experience have shown that large scale conventional military operations are less useful than innovative combinations of intelligence, detective work and Special Forces.” There are clear indications that the US intends to utilise Special Forces as counter-terrorism enforcers of choice, for some time to come.

The war on terror that was implemented after 9/11 demanded unconventional interventions to fight an adversary that is geographically spread across several countries, and organisationally structured so as to evade detection and infiltration by intelligence operatives. The deployment of Special Forces and the use of UAVs in the rather ‘shadowy’ world of counter-terrorism operations were thus two of the main security and military consequences of the terror attack on 11 September 2001.

The growth of al Qaeda in the Sahel in Somalia and possibly now in Nigeria could spark more operations by the JSOC and UAV attacks on the African continent. Therefore, it is indeed necessary for the United Nations and African Union to interrogate legal principles and rules of engagement for the deployment of UAVs and foreign Special Forces on African soil. But, regardless of all the murkiness, one thing is clear, 9/11 did for unmanned weapons systems what the First World War did for the development of tanks and the use of aeroplanes in war: it revolutionised the technology, and paved the way for an all consuming arms race.