2013 Kenyan Election Outlook – What will the future hold?

The presidential elections in Kenya on 4 March will test the progress Kenyan society has made towards peace and stability after the highly contested and violent elections of 2007.

The elections are taking place in an environment of uncertainty. A number of key political contenders face International Criminal Court (ICC) charges for their alleged role in the displacement, torture, persecution and killing of civilians in the aftermath of the 2007 elections.

Since Kenya’s first multi-party elections in 1992, elections have repeatedly triggered unrest and sometimes violent clashes between ethnic groups. Ethnically-based politics combined with a struggle over access to resources have their roots in the colonial era where access to land, political power and authority over others was determined on the basis of ethnicity. In post-colonial Kenya, politics became a zero-sum game where capture of the state and its resources was considered the only way of securing largesse for various interests.

The 27 December 2007 elections were arguably the most contested elections in Kenya’s history. The results declaring the incumbent president, Mwai Kibaki, leader of the Party of National Unity (PNU), the winner were widely rejected by the supporters of Raila Odinga, leader of the Orange Democratic Movement (ODM). The country quickly descended into violence leading to the death of over 1500 people and the displacement of a further half a million. The violence only ended after international mediation under Kofi Annan brokered a power-sharing deal between the two main protagonists. Subsequent investigations found wide-spread tampering with the election results by all the parties.

Several steps were taken to deal with the fallout of the 2007 elections. An Independent Review Commission (IREC) established with the help of the African Union’s Panel of Eminent African Personalities was tasked with setting up a tribunal to try those directly involved in the post-election violence. However, the IREC achieved little success. After the failure of the Kenyan Truth, Justice and Reconciliation Commission to submit a report on the findings of its investigations, the IREC recommended that the perpetrators be charged by the ICC with crimes against humanity. Among those indicted in this group are Deputy Prime Minister Uhuru Kenyatta and former cabinet minister William Ruto. They are running mates in the coming elections under the umbrella of the Jubilee Coalition. Although both have denied the charges against them, they have agreed, in public, to respect the outcome of the ICC ruling even in the event of an election outcome in their favour. Should Kenyatta win the elections in March, or the runoff in April, he would become the second sitting president after Sudan’s Omar Bashir to face ICC indictment.

How are the 2013 elections different?

The elections in Kenya are taking place against the backdrop of a very different constitutional framework. The adoption of the new constitution in a referendum in August 2010 introduced a number of radical changes to Kenya’s political system, such as long overdue electoral reforms and an increase in the power of the judiciary. The establishment of new administrative units (47 counties) prescribed by the constitution has changed the dynamic of the election process very significantly. By increasing the number of parliamentary seats and reforming the electoral system, it is hoped that marginalised groups will now have an opportunity for much more significant representation in parliament and political leaders can no longer afford to draw their support solely from one ethnic group.

Indeed, the new electoral system could potentially encourage greater integration of ‘ethnic interests’ and in turn strengthen social cohesion and democracy over the medium term. The presidential candidates are now expected to win 50% plus one of the popular vote and at least 25% in more than half the 47 counties. This means that unlike in previous elections it is almost impossible for a candidate to win with the support of only one ethnic or regional grouping. A study done by the International Crisis Group that was published in January 2013 shows that voter behaviour is likely to shift away from ethnic identity as more people particularly in the Rift Valley and Central Kenya, key swing regions, are far more open to voting outside their ethnic groups.

Nonetheless, ethnically-based politics remain endemic in Kenya. Given the nature of coalition building and the support base of candidates, it is highly likely that there will be a close run-off election. Two main coalitions have emerged after the adoption of the new constitution. The first is The Coalition for Reform and Democracy (CORD) led by Prime Minister Raila Odinga with Kalonzo Musyoka as his running mate. This coalition is likely to draw votes from the Nyanza (Luo), Eastern (Kamba) and Coast/North Eastern (Muslim) Provinces. The second coalition called The Jubilee Coalition is likely to receive more votes from the Central (Kikuyu), Rift Valley (Kalenjins), Nyanza (Kisii) and Eastern (Embus and Merus) Provinces.

Have the underlying grievances being addressed?

Despite the positive impact of the new constitution, many grievances that were at the root of the 2007 violence remain. These include high youth unemployment, poverty, large numbers of internally displaced people, corruption, ethnic and religious inequality, and a lack of access to land and resources. Conflicts in the Coast Province and Tana River delta, which have to date claimed the lives of nearly 200 people since fighting started in August 2012, have raised concerns that the 2013 election may see a recurrence of violence. The Mombasa Republican Council, a separatist group from the Coast Province has called for a boycott of the elections in protest against perceived land and economic inequalities between ethnic and religious groups in the area. While the conflict is very local and politically motivated, the Coast province is proving to be the most volatile of the 47 Kenyan counties. In addition, there are fears that it could affect the tourism sector, Kenya’s main foreign income earner negatively, as well as Kenya’s pivotal position as the gateway for trade with the rest of the region.

The Independent Electoral and Boundaries Commission (IEBC) and other civil society organisations have initiated various voter education campaigns aimed at making voters more aware of their role in the electoral process and the importance of holding peaceful elections. The presidential debates have proven effective in raising policy issues above ethnic polarisation and have had a sobering effect on the electorate and campaigners alongside the heavy peace messaging of the afore-mentioned voter education campaigns. Should these interventions result in a positive behaviour of all the participants in the election, namely citizens, political leaders and the media, the election process is likely to be a close but peaceful election, including an uneventful second run-off election.

However, it is also possible that while the first round goes relatively smoothly, the second round could be highly contested and tense resulting in violent clashes between supporters. While the safeguards preventing hate speech and violence in the media are expected to be effective, the regulation of social media is more challenging. Much of the hate speech and calls to boycott elections or incitement of inter-ethnic violence have moved to Facebook and Twitter. Nonetheless, it is hoped that all the political figures and leaders of coalitions will make strong statements to disassociate themselves from these calls and urge followers to operate in non-violent ways.

While some attempts at vote rigging might occur as in the 2007 elections, the introduction of the Biometric voter registration system technology, which captures finger prints and other essential voter information, will assist to ensure that there are no duplicates on the voters’ roll. This is in line with IEBC’s successful removal of 20,000 duplicated names from the voters’ roll. The IEBC with the help of international observers from the region and the UN will also have to keep a close eye on the counting and tallying of results. Results should be made available to all citizens in a timely manner and the process must be shown to be transparent.

However, even in such circumstances, the elephant in the room remains the ICC indictment against key figures.

Given the underlying conditions that create a fertile breeding ground for violence and the impact of the ICC court case, including the possibility of impeachment by parliament of key political figures prominent in the 2013 elections, one should not discount completely the possibility of a repeat of the 2007 election situation. A worst case outcome is one where a flare-up of violence occurs as a result of an inconclusive first and second round of elections linked to vote rigging, politicisation of ethnicity and the instability inherent to the new political coalitions. Moreover, the election might fail to deliver a clear winner that enjoys broad-based support among all Kenyans. The ICC proceedings against Kenyatta and Ruto (potential president and deputy president respectively) could create an internal backlash in Kenya that could result in the country’s withdrawal from the Statute of Rome, leading to a downward spiral in its relations with its main Northern partners. Already, Kenya’s relations with key global economies is in turmoil as is evidenced by the warning from the United States, France and the United Kingdom that Kenyans should expect a negative fall-out in their dealings with these countries should they choose leaders that are compromised. The stance has led most analysts to conclude that it is in the interest of all Kenyans that Ruto, Kenyatta and others agree to transparent contingency arrangements and a clear succession plan in the event of long drawn-out court cases against them.

Despite public support of the judiciary, failure, by this organ, to adequately address the variety of legal disputes could result in overall disillusionment with the constitution. This in turn could prompt wide-scale discontent of a violent nature from the supporters of the reform agenda – the development of which preoccupied Kenyans for close to three years after the 2007 violent clashes – leading to significant political instability and uncertainty in the country and potentially severe stagnation in the economy over the longer term.

On 4 March 2013, the world will be keenly watching the unfolding election in Kenya and its aftermath. Kenyans are facing stark choices about the road ahead. The question is whether they and their leaders are ready to deal with the potential negative fall-out of some of these choices. 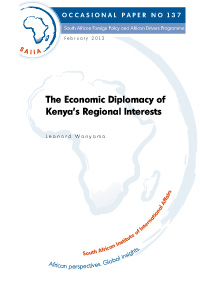 Increasing attractiveness of East Africa as a ‘frontier market’ has put Kenya in the spotlight as a gateway to the region. The country identifies six sectors and is currently implementing flagship projects to enhance its prospects. Existing research is mainly concerned with descriptive studies of economic and commercial subjects within the East African context in terms of content and implementation of policy. There are very few attempts at directly linking these topics with the act of diplomacy. This paper is an exploratory attempt at connecting relevant issues within Kenya’s contemporary economic diplomacy in relation to its regional trade interests and the degree of political risk.