Do South Africa and the European Union need each other?

In the EU’s backyard, escalating tensions in North Africa and the Middle East, from the impasse in Syria to the rising anger among Muslims about a film insulting the Prophet, play themselves out in a European economic malaise that still has to resolve itself. In South Africa, the Marikana mine massacre, the spread of unrest to other mines, and the demagoguery employed as a tool for political gain, have placed this country on a knife’s edge in the run-up to the ANC leadership ‘battle’ in December 2012.

Looking back: Changes since the first EU-SA Summit
Much has changed in the world since the first such summit was held in 2007. The most fundamental change perhaps has been how the EU is perceived in the aftermath of the sovereign debt crisis of many of its member states. In 2007 no-one would have anticipated the euro-crisis, and the African Union – just five years old – had modelled its structures on those of the EU, its model of integration to be emulated.

Five years later, the relevance of the EU’s regional integration model is increasingly being questioned outside of Europe. Africa, notwithstanding its multiplicity of regional schemes and lapsed timeframes for achieving common markets and common currencies, may now be excused for not meeting these deadlines. Rather, a more appropriate model might be to understand regional integration not as a vehicle for deeper economic union, but simply as a tool for facilitating freer trade. The incongruity of creating a common currency among countries in Europe at very different levels of economic development and competitiveness was unmasked when the crisis hit – how much more inappropriate this would be in Africa, where the differences among countries are even greater.

The end of the Cold War saw Europe and the West initially enjoy a relative monopoly on development models, although China’s rise had begun to erode this by the first years of the 21st century. But the EU’s advantage, compared to the US, had always lain in its adoption of a social market economy, characterised by a strong welfare state aimed at minimising the vagaries of the market and building social cohesion. The current malaise means that the model will require serious recalibration of its engine if it is to survive well into the 21st century.  Furthermore, China and other emerging ‘donors’ are challenging the way in which development aid is done.

With regulatory and governance flaws in its architecture exposed, the EU is perceived to have lost much of the moral high ground in these debates. All of this has been inimical to the EU’s ability to  maintain its international influence during a period of great power flux and help shape a new world order. Its internal troubles have deepened the ‘Fortress Europe’ mentality in dealing with challenges at home such as migration, radicalisation and eroding competitiveness with a concomitant rise in various forms of protectionism.

Ironically, for an actor that prides itself in being the pre-eminent multilateralist, these have impeded the EU’s ostensible championing of a rules-based global system, while its upholding of key normative values has often come up hollow in the face of realpolitik.

Joseph Nye reminds us that soft power rests ‘heavily’ on three pillars: ‘culture (in places where it is attractive to others), its political values (when it lives up to them at home and abroad), and its foreign policies (when others see them as legitimate and having moral authority)’. Soft power has long been considered a central feature of the EU’s global influence. Yet, on many soft power elements, the EU (and its member states) often falls short. And the unresolved euro-zone crisis has emasculated its economic soft power attributes, although talk of its demise may be premature.

These European challenges, which moved one analyst to write a book on Europe’s Decline and Fall: The struggle against global irrelevance, invariably colour the way in which its ‘strategic partners’ view the relationship.

The EU-SA relationship: friendship and friction
Established in 2007 to broaden and deepen the engagement between the EU and South Africa as a leader in the African continent, the EU-SA Strategic Partnership is intended to provide a forum for the two to discuss purely bilateral matters, but equally importantly, matters pertaining to continental and global challenges, underpinned by ‘the common commitment to promoting an agenda of liberty, peace, security and stability in the world, and in Africa in particular’.

The bilateral element is a healthy one: the EU is South Africa’s major trading and investment partner, being the single largest market for our manufactured exports. This is important, given the South African government’s emphasis on the need to ‘re-industrialise’ the economy.

On the other hand, while the EU remains South Africa’s single largest aid donor, this development cooperation forms a very small part of the South African budget, and is likely to fall further as states reduce their assistance to middle-income countries such as South Africa.

Regionally, the EU is a major supporter of Africa’s continental peace and security architecture. The EU and its member states also provide substantial help for regional integration and infrastructure initiatives, often overlooked in the face of the growing Chinese presence in this sector. These elements are important for South Africa’s own Africa agenda; indeed as South Africa itself becomes a donor, and establishes the South African Development Partnership Agency, the EU and its member states are potentially trilateral partners in projects on the continent. 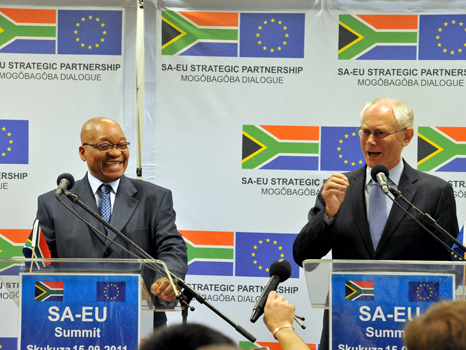 But the EU’s fraught efforts to negotiate Economic Partnerships Agreements (EPAs) with Southern Africa and other regions in Africa severely tainted its image, reaffirming suspicions held by some that EPAs were simply tools to gain advantage over new actors, specifically China, in Africa. This is a very simplistic analysis of the problems the long-drawn out EPA negotiations faced, but it is reflective of the perceptual impact they had, made more apparent by the articulation of EPAs as having a developmental mandate.

The EU-South Africa Strategic Partnership contains a very important political dimension, because Europe recognises the regional and global role that South Africa can and does play.

The truth is that for all the high-level engagement, the two often have a difficult political relationship.  Underlying this is the South African belief that the EU’s actions are motivated either by a colonial, imperialist mentality – seen most dramatically in its sidelining of the African Union during the Libya crisis – or self-interest in relation to “helping” African economies.

Two examples reflect this: the lack of progress on WTO Doha Round; and the introduction of ‘green’ issues into the trade debate, the consequences of which may be to block imports from developing economies because of non-compliance with ‘green’ criteria. The overall impression created is that the EU gives with the one hand and takes with the other.

On one level, the EU and South Africa share values and a world view: support democracy, human rights, women’s empowerment, a socially cohesive and just society. Both the EU and South Africa position themselves in global debates as committed multilateralists, seeing multilateralism not merely as an instrument of diplomacy, but as a general principle for conducting international affairs to ensure greater fairness and order in the world. The COP 17 summit in Durban in 2011 was a good example of cooperation between them to push for an outcome.

Southern solidarity
Yet, the EU and South Africa have not always seen eye-to-eye in the global governance realm. Reform of the Bretton Woods institutions is a good case in point. South Africa has been extremely active in advocating for their reform, even though as a small country it will not gain much in any of the mooted shifts in voting shares. It is a well-known fact that Europe is over-represented both in the Bretton Woods institutions and in the G20. But Europe has been timid in ‘modernising multilateralism’, as European Parliament president Jerzy Buzek observed in 2010.

The economic shifts away from the North portend declining political legitimacy for existing multilateral institutions that do not reflect these changes. And it is here that the strategic partnerships that South Africa is developing with the BRICS take on added significance.

The BRICS nations represent the ‘other’, demanding a faster pace of change, and viewing the current financial and developmental institutions as insufficient to deal with global challenges, or indeed to accommodate new powers.

Historically, developing nations have traded more with the North than amongst themselves. This is changing, accelerated by recession in Europe and the US. BRICS and other groupings are creating spaces to develop common positions to influence global policy. In the absence of true reform of global institutions they may well develop parallel structures – for some, the announcement of a BRICS Development Bank is just that.

More broadly, however, while Southern solidarity remains a useful rhetorical device, it amounts to very little in substance. The emerging powers pursue their own particular economic and political interests. And these are not always the same as South Africa’s.

Conclusion
Clearly the EU has much to think about as it tackles the twin challenges of internal economic fragility and external ‘winds of change’.

Yet, for all its weaknesses, it is still the single largest market, producing a fifth of the world’s GDP in purchasing power parity, ranks among the highest in terms of standard of living, and wields significant influence in global forums. While its values agenda is not always coherent or consistent, its internal institutional composition is based on the principle of constitutionalism.

In that way, the EU shares common values with South Africa. South Africa’s own aspirations to project influence and to play a constructive role in reforming global institutions require it to build alliances across traditional divides. Thus the formal forums that the EU and South Africa have constructed to allow for a broad-ranging conversation should be seized as the opportunity to deal with common problems, foster better understanding of different approaches to key international questions, and help to push the global agenda forward.