Much has been reported lately about the Southern African Customs Union (SACU) with particular reference to the economic crisis in Swaziland and, to a lesser extent, Lesotho.

Some of these reports have been inaccurate and distorted.  South Africa has once again been portrayed as the regional “bully” that is hampering the growth of neighbouring countries by withholding resources and by hogging investment in the region.

Some have even gone so far as to imply that South Africa is deliberately putting in place industrial policies, such as the recently announced incentives for manufacturers, that will deflect the attention of business away from the other SACU members (Botswana, Lesotho, Namibia and Swaziland – the BLNS) who are also hoping to create jobs and expand economic activity following the global recession.

Before the upcoming SACU Heads of State Summit on 25 March 2011, it is important to dispel some of the myths that are being perpetuated by the current debate:

The revenue sharing formula is at the heart of SACU and determines how the inflow of money from all customs, excise and additional duties is distributed between the member states.  The share accruing to each member state is calculated from three distinct components: customs, excise and development.  It is a complex formula and the current version was first implemented in 2006 following difficult negotiations over a number of years.  It has not changed this year.

The significant decreases in funding provided to the BLNS from the SACU revenue pool are as a result of decreased revenues – particularly customs duty collections – following the global recession of 2008 and 2009.  This was in all likelihood a result of the decreased global demand and commodity prices. South Africa does not decide how much to give the

BLNS and does not exercise unilateral control over SACU revenue (even though it does collect and distribute most of the money flowing into the region).  This is a carefully managed process and one that is overseen closely by SACU Finance Ministers who have regular engagements.

Myth 2: South Africa Benefits from SACU to the Detriment of the BLNS

The largest share of the SACU revenue pool is allocated to South Africa.  This is based on the reality that South Africa is the largest economy in the region (by a long way) and that it is the dominant trader.  The three components as mentioned above are distributed as follows: the customs component is allocated according to each country’s share of total intra-SACU trade, including re-exports; the excise component, net of the development component, is allocated on the basis of GDP and lastly, the development component is fixed at 15% of the total excise pool and distributed to all SACU members according to the inverse of each country’s GDP/capita.

However, in 2008/9 for example, South Africa contributed over ZAR45 billion (or 98%) to the revenue pool yet received an amount of just over ZAR21 billion.  The proportional sharing of the excise component reflects South Africa’s concern, with its much larger GDP, to obtain the largest share of excise.

A face value examination of the amount of money distributed under the SACU arrangement does not tell the whole story however.  Due to South Africa’s large trade surplus with the BLNS, the customs component is linked with intra-SACU imports to compensate BLNS for the cost-raising and polarisation disadvantages of being in a customs union with South Africa.  These transfers amounted to ZAR27 billion in 2008, which is equivalent to 1.15 percent of South Africa’s GDP.

Some have suggested that this does in fact represent “aid” provided by South Africa to the BLNS.  Dr Mzukisi Qobo for one, states that in essence, this is development aid in disguise because it comes from the same pool of money that could address socio-economic challenges in South Africa.  If this is the case then South Africa would be one of the largest donors in the world with most developed nations struggling to meet the target of providing development assistance at a level of 0.7% of GDP.

Myth 3: South Africa is the Only Destination for Investment in the Region

There are undoubtedly significant differences between the economies of SACU with South Africa dominant on all fronts.  This does not mean however that South Africa has been the only country in the region to attract investment and industrial development. For example, Namibia has attracted significant interest from emerging partners from China and Russia who are looking to invest in mineral resources projects and other sectors such as the investment in Ohorongo Cement which is valued at 2.5 billion Namibian Dollars (N$).  Some six investments worth N$1.5 billion were approved in the manufacturing sector and an additional six, worth N$1.177 billion, in the construction industry.

South Africa is also not the only SACU member to provide incentives and support programmes to attract investors and assist domestic industries.  Botswana has given assistance packages to local textiles manufacturers and is consistently rated one of the top credit risks on the African continent. 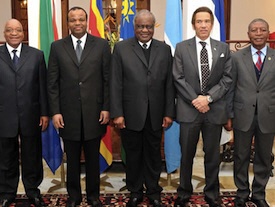 A proposal for reform of the existing revenue sharing formula has been put forward by the South African National Treasury but this is not an indication that South Africa is seeking to collapse SACU.  The opposite is in fact true.  South Africa remains committed to using SACU to ensure a level of economic stability in the region.  One of the main motivations behind possible changes to the revenue sharing formula is to achieve a greater level of stability for the BLNS countries in their income flows from the SACU pool.

By not having all of the SACU revenue linked to trade then there is a greater chance to ensure more predictable funds for the member states.  There is no doubt that South African government officials have been frustrated by SACU at certain points in time, particularly during the negotiations of the Economic Partnership Agreement with the European Union.  However, these challenges have often been used by SACU to deepen interaction among the members and to advance a stronger common front.

The reality is that SACU does face many challenges.  These include declining revenue and the need to achieve inclusive economic growth that will impact on high levels of unemployment in the region.  There are aspects of the latest SACU Agreement that have yet to be fully implemented and the ongoing trade negotiations with third parties (including the EU and India) continue to be challenging given the diverse economies of the members.

We can take heart however from the fact that Heads of State are again willing to take the time to meet to discuss the future of the Customs Union at the end of this month.  This is indicative of the importance of this regional grouping and its role in the economic development of our neighbourhood.