The Goal is Growth: Perspectives on the New Growth Plan

South Africa has its sights firmly set on the creation of five million new jobs by 2020.

This is the main focus of the New Growth Path (NGP), released in November 2010. It is South Africa’s latest in a long line of documents defining economic policy and is a product of the Department of Economic Development. The NGP seeks to address the high levels of unemployment in South Africa as well as foster sustainable economic growth.

‘Growth’ is what the SA government seeks to achieve through identifying key ‘jobs drivers’, with high employment creation potential and the implementation of supporting policies to take advantage of this potential.

The main tool will be an active industrial policy that will be propped up by trade policy. These key ‘jobs drivers’ include agriculture and agro-processing, mining and beneficiation, manufacturing, the ‘green economy’ as well as tourism. There is also an emphasis on infrastructure and development in such sectors as energy, transport, communications, water and housing.

The NGP has not been without controversy. The labour and business constituents have had serious reservations about some of the provisions, particularly on the issue of wage caps. Nonetheless, with presidential approval, it is clearly set to serve as the country’s premier economic development plan for the time being.

In his State of the Nation address on 12 February 2011, President Jacob Zuma declared 2011 ‘a year of job creation’ and cited the NGP as the guiding policy document in this drive. Government departments are to align their programmes with the job creation imperative. State owned enterprises, development finance institutions, as well as the private sector have been called upon to work together towards this goal.

President Zuma also announced that government will establish a ’job fund’ of ZAR 9 billion over the next three years, which will be used to finance job-creation initiatives. The International Development Corporation (IDC), a self-financing national Development Finance Institute (DFI), has also set aside ZAR 10 billion over the next five years for investment in the sectors identified for employment creation potential. ZAR 20 billion will also be channelled into tax breaks to promote investment in the manufacturing sector. In addition, the South African government cabinet Infrastructure Development Cluster has announced that it has identified ZAR 1 trillion worth of infrastructure projects for the government to undertake in the next four years.

It follows therefore that we expect the NGP to be the main focus of the SA National Budget, to be presented by Finance Minister Pravin Gordhan on Wednesday, 23 February 2011*. This is despite the fact that the National Treasury has not exactly been in agreement with the idea of increased state intervention in the markets.

Minister Gordhan is expected to further elaborate on the job creation strategies outlined in the NGP, as well as elaborate on SA government spending on this issue, as pronounced by President Zuma in his address. It is a particularly interesting dynamic to the whole debate, regarding the disconnect between government departments on the direction of economic policy. It will be interesting to track the allocation of decision-making powers over the new resources. 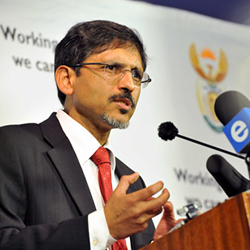 It seems clear that Ebrahim Patel, SA Minister of Economic Development (pictured left), and his ministry dictates the economic policy direction. But it is important to stress that achievement of the nation’s developmental goals, through the NGP, is more than just about throwing money at the impediments.

There are various other issues at play that require urgent attention. These include the inflexible labour markets, supply-side constraints, the lack of adequate Foreign Direct Investment (FDI) flows, government inefficiency and incapacity, implementing appropriate macro-economic policies, as well as ensuring that competition policy is effective, so as to encourage the growth of small and medium enterprises.

While the SA government seems to be taking concerted steps to address supply-side challenges through infrastructure investment, there is still the question of the funding of these proposed investments. Nationalisation might not yet be on Zuma’s governance agenda but it is on the ANC’s agenda and until is the policy is resolved; it will be difficult to attract FDI.

Most importantly, implementation and delivery is critical to the success of the NGP. Otherwise it becomes just another one of the Zuma government’s ambitious policies, and ultimately, with little real impact on the lives of South Africans.