Two new books on the emergence of the Brazil, Russia, India, China and South Africa (BRICS) grouping will come under the spotlight during SAIIA’s two-day conference on ‘BRICS and Africa:

A partnership for Development’ on Wednesday, 13 November 2013. A special discussion at the conference will explore the impact of this emerging powers bloc on the current global political and economic systems.

The two books are:

The panel discussion will be held on Wednesday, 13 November 2013 at 9H00 at the Crowne Plaza Rosebank, Johannesburg.

Laying the BRICS of a New Global Order, edited by Francis A. Kornegay and Narnia Bohler-Muller 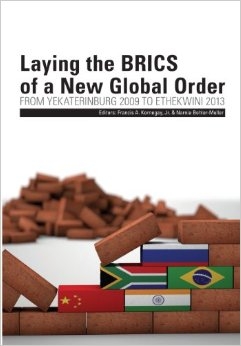 The contributions in this compilation on the emergence of a new global order through BRICS serve to illustrate the complexities inherent in the creation of such a coalition – alternatively referred to as a ‘grouping’, ‘association’ or ‘forum’ – with each country differently situated geo-politically as well as ideologically and culturally, and in some instances even in conflict with one another in matters of regional peace and security.

The fact that there are important commonalities of converging interests, amongst others, the status of emerging economic powers and the furtherance of South-South cooperation as well as reforming global governance, cannot and should not hide complexities and contradictions. These are clearly apparent both within and between the BRICS countries.

Each chapter contributor writes from a different discipline, country and regional perspective, and it is this diversity that enriches the debate and conversation. As such, there remains enormous room for debate on the subject matter of this book and the diverse contributions open up the parameters of the debate even further. The aim is to ensure that scholars, commentators and practitioners continue to engage critically with theory and practice related to global multilateralism, and BRICS in particular.

South Africa in BRICS: Salvation or ruination? by William Gumede 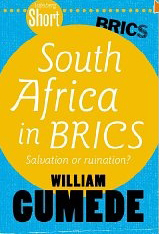 The economic landscape of the world is changing dramatically. The power structure that favoured developed countries is falling away under the effects of the global financial crisis of 2008, the slowdown in the US economy and the debt crisis in Europe. At the same time developing countries are gaining economic ground.

South Africa is among the developing countries taking a more prominent role on the global stage. With China, Brazil, Russia and India it is part of the BRICS alliance, created to give the leading developing countries a stronger position when it comes to taking global action.

But BRICS has its downsides, and South Africa faces many potential pitfalls as well as potential benefits. Will the richer countries in the alliance use their power to control BRICS initiatives? Can the member countries work together effectively when they are also in competition? What can South Africa gain from it?

Renowned commentator and analyst William Gumede gives an incisive and thorough breakdown of what BRICS could mean for South Africa and Africa in general.