The signing of the Tripartite Free Trade Agreement (TFTA) two weeks ago in Egypt between three of Africa’s major economic blocs COMESA, the EAC and SADC is an important development for intra-African trade and investment.

By taking the first step towards the establishment of an economic bloc spanning the continent from South to North East, the African leaders have also laid the foundation for the establishment of a sizeable consumer market for international investors. Yet, it hardly received the attention it deserved at the AU’s 25th Summit in Johannesburg from 7-15 June 2015.

Instead, the TFTA was overshadowed by the Omar al-Bashir debacle— an outcome of the South African government’s disregard of a South African court order to detain the Sudanese President who has been indicted by the International Criminal Court for war crimes committed in Darfur. How might foreign investors view this incident in their assessment of the security of their investments and recourse to the law and how should the AU respond to make Africa safer and more attractive for investors?

Civil wars in South Sudan and Libya, as well as terrorist threats by extremist groups like Boko Haram in the West and al-Shabab in the East, remain pertinent peace and security issues which the AU has found difficult to resolve. South Africa had to step in at the last minute to host the 25th AU Summit as Chad had to withdraw because of the Boko Haram threat.

Insecurity in the region has also been boosted by the desire of a significant group of AU leaders, such as Burundi’s President, Pierre Nkurunziza, to extend their terms in office in contravention with the constitutions of their countries and despite AU pressure and engagement. While the AU does not have an official policy against heads of state serving more than two terms in office, the apparent erosion of constitutional democratic institutions was lamented by South African President Jacob Zuma at the World Economic Forum held in Cape Town from 3-5 June 2015.

South Africa in turn has since been embarrassed by the outbreak of xenophobic violence directed primarily towards other African foreign nationals living and working here.

What are the implications of this political unrest on Africa’s perception among foreigners, and how will that impact on much needed investment flows to the continent?

The Benefits of Foreign Direct Investment

Foreign direct investment (FDI) is touted for its many benefits to developing countries. The skills and technology foreign investors bring with them can help to stem the huge skills and knowledge shortage that African countries face until a well-trained labour force can be developed. FDI often boosts exports and earns much needed foreign reserves while improving the competitiveness and efficiency of local producers. Until African countries have the local capacity to do so, FDI can also facilitate the expansion of many of the fundamentals of growth such as public infrastructure and information and communication technology.

However, there is growing recognition that FDI into the developing world has not accrued many of these benefits where foreign investments have not been carefully managed. FDI is not a panacea for Africa’s development challenges and, as such, developing countries have become increasingly aware that attracting the “right” kind of FDI is important for development. Foreign investments which create local employment, upskill the local workforce, and contribute towards a country’s industrial policy objectives are considered “sustainable” and are desired above other kinds of investment. Yet the majority of FDI in the developing world is focused on the extractives sector where these spill-overs often do not occur.

Attracting the right type of FDI requires fierce competition among investment destinations, and the winning countries are those which can create the investment climate which foreign investors seek. Investors want to know that there are viable and sustainable business opportunities for them to exploit, and that the value of their investment will be protected by the host state. Threats to regional peace and security jeopardise this first criterion, and the erosion of sound governance institutions undermines the second.

The World Bank’s Multilateral Investment Agency (MIGA) and the Economist’s Intelligence Unit have surveyed foreign investors to determine what the top constraints to FDI in the developing world are. Political risk always features within the top, coming second only to macroeconomic instability in the 2013 survey. Furthermore, the survey reported that a significant number of foreign investors cancelled existing investments, or withdrew planned investments, due to political risk. 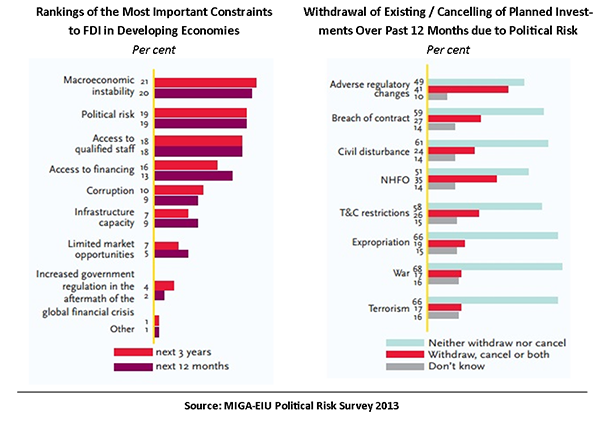 Political risk is, therefore, an important factor for African countries to mitigate in order to attract the right kind of FDI. Many post-dependence African states have signed international investment agreements that bind them to protect foreign investors’ assets (and compensate them, at market value, when they are expropriated) in order to mitigate political instability. However, many have come to realise that these agreements overly favour foreign investors and do not allow the state to regulate in the public interest without having to fully compensate foreign investors. For example, South Africa signed many bilateral investment treaties with Western European states in the late 1990s to mitigate the political uncertainty following the country’s democratic transition. After reviewing these agreements, it determined that they were not contributing to FDI and restricted the state’s ability to realise social objectives. South Africa has cancelled these agreements and is seeking to replace its FDI regulation with a domestic bill. Namibia seems to be following suit with its own foreign investment regulatory reforms.

War and terrorism are often cited as less frequent incidents of political risk, but their effects are devastating and can result in the total destruction of an investor’s assets. Risk insurance providers in the public, private and multilateral sector guarantee foreign investors against many types of political risk, but at a cost. As would be expected, conflict-affected regions and countries that fare badly on governance indexes typically carry a higher risk factor, resulting in a higher risk premium for political risk guarantees. This makes investing in politically unstable countries more expensive and, even where the potential reward is great, less appealing to foreign investors.

What can the AU do to ameliorate political risk in Africa?

The single most important contribution of the AU in the above regard is to prioritise and pursue actionable policies and engagement strategies that deal with political risks such as conflict, terrorism and the erosion of sound governance institutions in member states. Being able to attract the right kind of sustainable foreign investment will require Africa to have the competitive edge over regions such as South-East Asia and Latin America. While the continent’s relatively robust and high growth stands in its favour – especially against the backdrop of a global slump – political instability and the failure of African multilateral institutions such as the AU and African governments to address political risk severely constrains the continent’s ability to attract sustainable FDI. At a minimum, issues of political risk and their impact on the continent’s economic development need to be discussed at forums such as the AU summits, and the continent needs more African leaders to stand up for sound governance practices and effective institutions.