Manufacturing in Southern Africa: Dream or reality? The need to integrate into Global Value Chains

A meeting on the SADC Regional Investment Framework is taking place in Johannesburg this week, to look at, amongst other priorities, investment in regional and global value chains. These discussions will take place against the background of slowing global economic growth and a decline in commodity earnings for African countries.

While the Millennium Development Goals made good progress in lifting the poorest out of absolute poverty, the MDGs have not addressed growing inequality within countries. The poorest communities now reside within middle-income countries and no longer just in least-developed countries. With a decline in Overseas Development Assistance (ODA), financing for Africa’s development needs now comes from tax revenues followed by remittances, with ODA accounting for a third of remittances.

Nonetheless, eighty-three non-OECD countries are currently growing at double the OECD average of 0.4%, with a large number of African countries (notably not South Africa) in this grouping. Globally, there has been a shift towards participation in global value chains. Production across the world is increasingly fragmented, with firms no longer responsible for all value addition towards a final product. Instead, multiple firms in many corners of the world give input and export their contributions.

However, Southern Africa largely remains outside of these value chains. Some ascribe this to the region’s geographical distance from global markets and the associated comparative costs. However, the region is also weak at creating regional value chains, where geographical proximity is not a factor.

There are a number of reasons why this is the case, including the lack of infrastructural and economic integration and the difficulties exporters experience at the borders, as well as weak manufacturing sectors and a poor mix of tradable products.

Aid for Trade (A4T) programmes can have a positive impact on Africa’s integration into value chains in a progressive and sustainable manner. The objective of A4T programmes should be to encourage countries currently left out of global value chains to find ways to participate and make the gains thereof more equitable. A4T should also focus on the implementation of the World Trade Organisation Trade Facilitation Agreement, as removing barriers to trade has been shown to have the highest impact on low income countries that have hitherto been isolated from world trade.

However, governments also have an active role in attracting new investments from lead firms into the region. Unfortunately Southern African has not been able to market itself as enjoying a specific sectoral advantage. This is in comparison with Latin American countries like Costa Rica, which has aggressively marketed itself to the global medical equipment manufacturing sector, seeking to change its image from a third world eco-tourism destination to a high-tech manufacturing hub normally associated with Europe or North America. Such a brand-image change is also underway in Norway, which has been hit hard by the drop in oil prices. Norway has strategised around the Sustainable Development Goals (SDGs) and is seeking to find niche opportunities within this context around which to rebrand itself and restructure its economy.

However, creating a sophisticated strategy that results in higher regional or global value chain participation relies on the availability and accuracy of data, which is still lacking in Southern Africa. The OECD has developed the TiVA database, which measures trade in value addition and has become a sophisticated lens through which global value chains can be analysed. However, within Southern Africa (and in fact the entire continent) it is only South Africa that participates in this initiative. Without datasets from the rest of SADC, the tool remains of limited use for Southern African policymakers.

The database does, however, illuminate a number of key findings on South Africa, including the fact that the foreign content of its exports was only 19.5% in 2011, which is low compared to most countries. Over a third (35.7%) of the value of its manufactured exports reflected services content goods alone, which is at a similar level of OECD countries. This finding is in line with a World Bank report, ‘Factory Southern Africa’, which found that South Africa is well placed to promote its services into regional value chains and that new job creation would likely emerge from this sector rather than manufacturing.

OECD work has shown that Africa’s competitive advantage lies in agro-processing, with global demand for food ever growing and large tracts of arable land still under-utilised on the continent. The services component in agro-processing is also high in comparison to other manufacturing sectors, which indicates that services liberalisation agreements in Southern Africa will be key in unlocking the potential for regional value chain creation.

A complex picture emerges of how Southern Africa has fallen behind, not only in developing its manufacturing sector, but also in developing necessary infrastructure; promoting regional integration, trade facilitation and services liberalisation; investing in education, skills development and country branding; and data collection and sharing.

However, opportunities are increasing in the region given its population growth, rising income levels and reasonably stable environment in contrast to other regions. The challenge is for Southern Africa to rebrand itself as open for business opportunities, and to give real substance to such a brand. 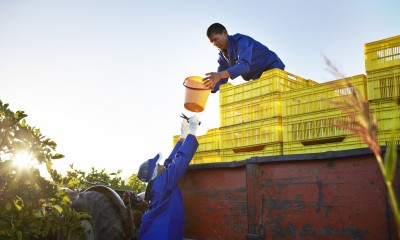